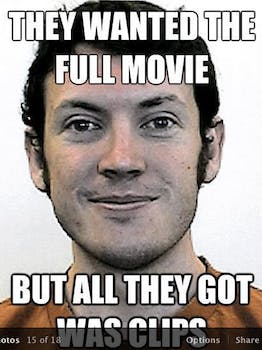 James Holmes (Batman Premiere Shooter) is the latest Facebook group to emerge as a celebration of the suspected shooter's movie theater assault.

New Facebook support groups are beginning to emerge in connection to The Dark Knight Rises shooting in Aurora, Colo.—for all the wrong reasons.

James Holmes (Batman Premiere Shooter) is the latest Facebook group to emerge as a celebration of the suspected shooter’s movie theater assault. The group originated on Friday and has since welcomed 50 people into the fold, most of whom have posted sympathetic messages to Holmes while simultaneously trivializing those who suffered at the hands of his attack.

Posts started to populate the page almost immediately after preliminary information about Holmes opened up to the public. They were death tallies at first, which led to jokes that justified Holmes’s alleged actions because “Avengers WAS better” than The Dark Knight Rises, and cracks about the grotesque irony surrounding a killing at a film that centers around a character’s “rise.”

By Friday afternoon, the page began catering to memes, all of which are either posted originally or shared by the group’s anonymous creator. A joke about Holmes’s alleged decision to set off a smoke bomb went first, then a crack about the Batman franchise’s use of death as a theme in its films. Eight have been posted onto the site today alone, each doing little to show any form of sympathy for those in Colorado affected by the shootings.

That particular group seems to have little motive save for the trivialization of the tragedy, but another group, Colorado Batman Shooter (James Holmes), has assumed Holmes’s identity and made efforts to tie the shooting to 9gag’s online community.

“I shot up a theater in Colorado for Le 9Gag army,” the anonymous creator declares in the group’s About section—a connection 9gag refuted on Friday.

Since opening up Saturday morning, the page’s creator has posted about “John Wilks [sic] Booth” serving as a role model, questioned why everybody’s mad at Holmes, and shared a few of the memes that James Holmes (Batman Premiere Shooter) posted onto its page.

A third group, James Holmes: American Hero, has since been deleted from Facebook’s site.

According to Facebook’s Statement of Rights and Responsibilities: “Any user may create a Page to express support for or interest in a brand, entity (place or organization), or public figure, provided that it is not likely to be confused with an official Page or violate someone’s rights.”

However, all three pages could be seen as a form of harassment to other users and could be deemed malicious.

Why anybody would create a page the celebrates such a gruesome, unnecessary act of violence is beyond anybody in the Daily Dot newsroom, but it’s important to note that there’s already been a wealth of Facebook groups dedicated to supporting those affected by the violence.