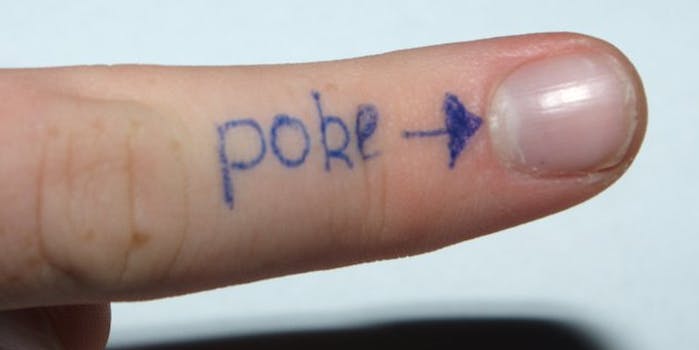 If you’re on probation for stalking your ex, make sure you don’t “poke” them on Facebook.

That’s the lesson a Houston man named Justin Pressler learned last week. In August 2013, the 25-year-old was convicted of stalking and harassing his ex-girlfriend and burglarizing her home in 2010. The prosecutor in the case, Jessica Escue, claimed Pressler “kept her in prison for the entire time of your relationship,” and District Judge J.D. Langley equated his behavior with “domestic terrorism.”

He was sentenced to a 10-year “shock probation” sentence, meaning that if Pressler served 180 days in prison without incident, Langley would review the case and let him out on probation.

Pressler served the six-month sentence, and was out on probation last month. On Feb. 8, his ex-girlfriend’s birthday, he engaged in one of the most maligned of online activities: He “poked” her on Facebook, and she told authorities. This violated the boundaries of his probation, which included no contact with his ex. On Feb. 20, his probation was revoked, and he now must wear a tracking device.

He’s also not allowed to use the Internet without adult supervision, for up to two years, including on a cellphone.

This case can teach not just Pressler, but all of us a lesson: Nothing good has ever come of a poke. Even Facebook doesn’t seem to know what it’s for. If you poke, you’re poking into a void of a thousand unreturned pokes. And, in Pressler’s case, into a tracking device.