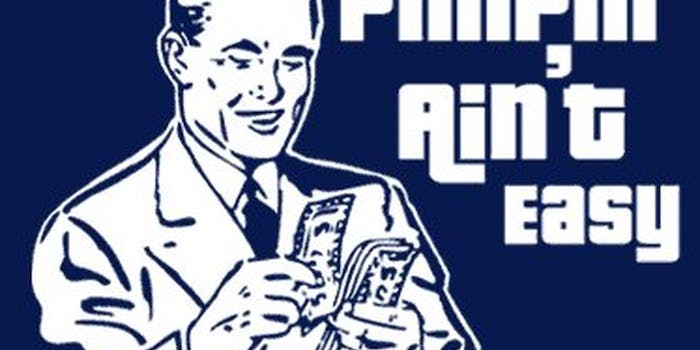 The San Francisco woman alleged that 23-year-old Anthony Dorton attacked her and forced her into prostitution, but her Facebook account revealed she may have been doing some pimping of her own.

A San Francisco woman’s lawsuit was derailed after details emerged about her penchant for pimping and eagerness to address the taboo profession on Facebook, Mashable reports. The woman, whose identity is not known, had accused 23-year-old alleged pimp Anthony Dorton of beating her up in a parking lot.

But Dorton’s public defender was able to get his client off the hook by arguing that the woman has a history of lying, pointing to evidence on her Facebook account as primary exhibit A.

On the account, the woman reportedly listed herself a double major in “Advanced Pimpin” and “keeping hoes in line” who made her money as a “head pimptress in charge.”

According to the public defender handling the case, the woman “frequently wrote about supervising and punishing prostitutes in additional Facebook comments.” She also posted several ads on “prostitution websites,” including some on behalf of other women.

But in court, the woman testified under oath that she was not a pimp—though she was a prostitute!—and had not had any history of operating within the sex-for-money industry until she moved out to California.

Those contradictions were enough to convince the jury that she was prone to lying, rewarding Dorton an acquittal of felony assault in the process.

“The complaining witness was caught in lie after lie,” Deputy Public Defender Qiana Washington told the San Francisco Public Defender. “This was a case that depended on her word, and she demonstrated it could not be trusted.”

Tough break. Time to let those lyrics from Hustle & Flow ring true: It’s hard out here for a pimp.