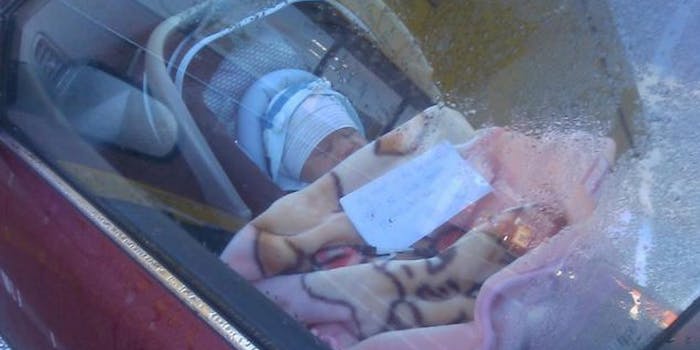 Mom who locked infant in car gets parenting advice from Facebook

A mother who locked her newborn baby in her car while she went grocery shopping has learned an important lesson in child-rearing.

A mother who locked her newborn baby in her car while she went grocery shopping has learned an important lesson in child-rearing after an outpouring of outrage from strangers on Facebook: Don’t lock your baby in the car.

The mother apparently thought she’d taken enough safety precautions on Saturday while she did shopping at a Porirua, New Zealand, supermarket. She wrapped her sleeping infant in a blanket and a knit cap and appended a note on top: “If anything goes wrong while I’m shopping, please call this number.” (FYI, new parents: Infants are highly portable. You can strap them to your chest like a lumpy fashion accessory or push them around in high-tech baby wagons.)

While she was inside, a man and his wife pulled into the parking spot next to her car. They were shocked to see the child alone. “We waited there for a little bit, wondering if the mum was just going to be two seconds and come back,” one of the good samaritans told the New Zealand Herald. “And my wife said, ‘I’m not going in without someone being here with the baby.'”

They snapped a photograph and called the mother. 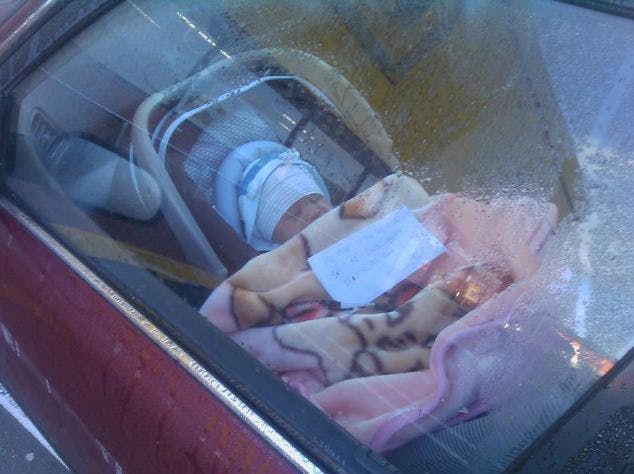 No one would have known about the bizarre event if that passerby hadn’t posted the photograph on Facebook. It was picked up by local radio personality Polly Gillespie, at which point it furiously fast across the social network. It’s illegal to leave a child under the age of 14 alone for an unreasonable amount of time or under unreasonable conditions, according to the Daily Mail, but police have said they won’t be making any arrests. None of the passersby have pressed charges.

On Facebook, some people took the mother’s side: “This is clearly early morning with dew on the car, there’s almost no cars in the carpark,” wrote one user on the Polly Gillespie page. “I reckon the woman just nipped in to grab milk, and made a spur of the moment decision not to wake her baby.”

Still, it’s not a good idea to lock your family dog in the car. So it kind of goes without saying that’s even more dangerous for a child.

As one New Zealand police officer told the Herald:

“Babies can dehydrate quickly and become very distressed. So for a newborn that’s one of the key issues. Plus there’s a security issue—a small baby is unable to defend itself if need be, or call for help, or anything like that.”