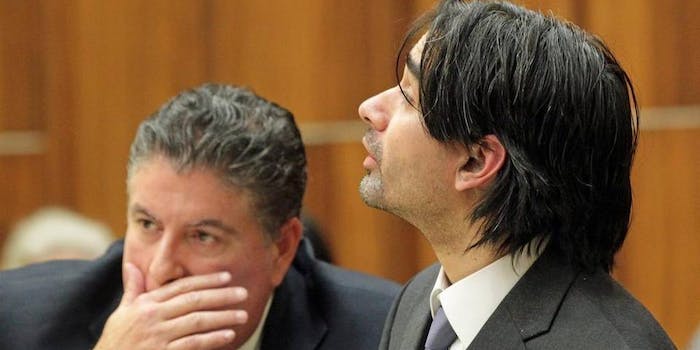 He faces life in prison.

More than two years after posting horrifying photos of his dead wife to Facebook—along with a succinct, cold confession—Derek Medina has been found guilty of second-degree murder.

He faces life in prison, though Medina, 33, showed no emotion upon learning his legal fate on Wednesday.

In August 2013, Medina shot his wife Jennifer Alfonso eight times following a heated domestic argument. As the Miami Herald reports, this was because Medina “wanted her dead,” as State Prosecutor Jennifer Alfonso told the jury Tuesday.

Medina’s defense painted the husband and father as an abused spouse who had reached a breaking point after longstanding marital abuse. His attorney, Saam Zangeneh, said that the lethal domestic encounter escalated after Alfonso lunged at Medina with a kitchen knife—that he acted with justifiable force, in self-defense.

“Once you realize this knife was in her hand, that’s a game changer,” he told jurors, according to the Herald.

But the defense rested last week after pointing out that Medina took time between the confrontation to walk upstairs and retrieve his gun, and after a medical examiner testified that Alfonso was cowering prior to being shot to death.

Shortly after he took pictures of the body, he uploaded them to Facebook along with the following caption:

For the second-degree murder charge to stick, state prosecutors needed show that Medina acted with a depraved mind. His baffling online trail of self-help ebooks—at least one of which tackled marriage counseling—and martial arts YouTube videos aided that process.

This one was updated just two days before he calmly turned himself into local authorities.

According to the Herald, State Prosecutor J. Scott Dunn admitted the Facebook confession was paramount, telling jurors: “It’s hard to tell the world you’re going to prison and walk that back.”

Medina was also convicted of illegal discharge of a firearm inside a buildling and with child neglect. His 10-year-old daughter was home during the altercation.