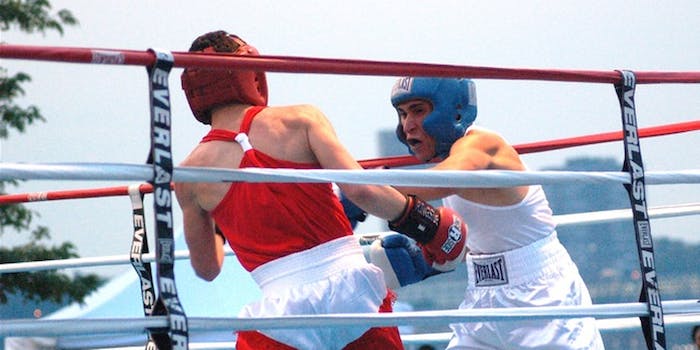 The first rule of fight club is you don't tweet about fight club.

As we all know, the first rule of fight club is that you do not talk about fight club. However, some New York kids didn’t seem to take this onboard, and instead set up a Facebook group for their version.

On a corner behind Atlantic Center Mall in Fort Greene, organised brawls took place in plain daylight, all set up through social media. Ignoring the fourth rule of fight club, the brawls often included as many as 30 people.

The loosely organised group came under fire on April 18, when a gun was brought to the gathering. After this incident, the 88th Precinct of the NYPD began monitoring Facebook and Twitter to intercept future fights.

Speaking to DNAinfo, the 88th Precinct’s commanding officer Capt. Peter Fiorillo discussed how they were clamping down on the illegal scrums.

“Fight club is organized by kids on Facebook and Twitter, and then they get in a circle and they fight. And where they like to fight is by the mall,” he said. “But then someone brought a gun to the fight and shots were fired.”

“Fortunately no one was hit,” Fiorillo added. No arrests were made.

Discussing the monitoring of online groups, Fiorillo stated that along with the 77th and 78th precincts, they would deploy as soon as they hear an incident could occur.

“We’ll hear word of a fight and we’ll follow them all day until they get to the trains and head home,” he said. “When we get intelligence that something big is about to happen, we deploy there.”

The owners of the mall said they are working with the NYPD to bring an end to the fight club. But as the seventh rule of fight club goes, fights will go on as long as they have to.