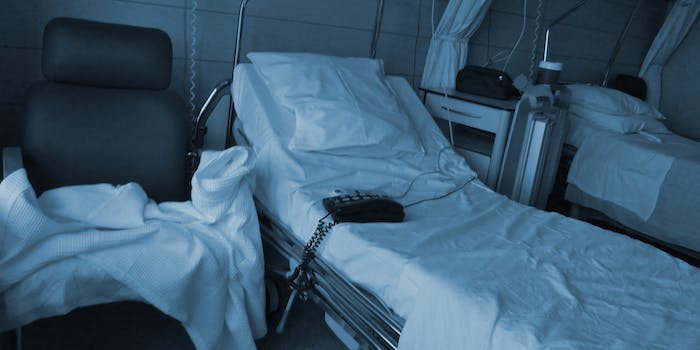 When you have a parent with a terminal illness, who is in and out of the hospital and may only have days or weeks left, it is a heart-wrenching and agonizing experience. You go through a mixture of anger, fear, love, and loss on almost a daily basis. Add to that all of the practical hassles—medical arrangements, and future plans that you would rather not make—and it can quickly take over your entire life.

So you can imagine how much more awkward it is when your parent is a Facebook celebrity.

This is an experience that a friend of mine recently described to me:

My dad is in hospice and we thought we had lost him again (last time was over Christmas). While he’s bouncing back, he’s never going to get better and it’s a matter of time. During this latest incident, I have thought a lot about Facebook etiquette in these matters.

Dad posts a lot. A LOT. I think it’s mostly junk, but he has quite a following. So when he doesn’t post, people ask questions and assume the worst. The last few times we thought we’d lost him, I have done brief updates because people just keep asking questions, and are curious or just downright nosy.

This last time I did a few quick updates. But Facebook creates this false sense of closeness with these people. Instead of just reading the post, everyone feels the need to comment on it or “like” it.  I don’t get the “like” part?  People ask a lot of follow up questions that are none of their business. Some of his followers have even tried to friend me?!

Now that this has happened, do I have an “obligation” to post for him if becomes unable again? How much detail is too much? When he passes, is it tacky to post the funeral arrangements? This is a just weird conversation to have.

In many ways, this is a quintessential “social media age” problem. Facebook, YouTube, and Twitter have given birth to thousands of “microcelebrities.” It’s part of the natural consequence of democratization of the web: the democratization of fame. The fans of a microcelebrity may only number in the thousands, but their passion can be as intense as the fans of any pop singer or movie star. All it takes is a person with the time and personality to be friendly, engaging, and interesting, and he or she can acquire a social media fan base.

Microcelebrities do not enjoy the social and professional protections that actual celebrities have. A movie star or pop singer will have agents, managers, and public relations firms to help deal with social media in times of crisis. For a microcelebrity, the responsibility ends up entirely on the family; and in many cases, the family does not fully understand or connect with the notion of “Internet fame.”

So what is the proper etiquette in this situation? Whether you are the family member of a social media microcelebrity, or even one of the fans, there are a few things you should keep in mind.

Facebook “likes” don’t mean what you think they mean

If you have posted an update saying that your dad is in the hospital and experiencing serious health difficulties, it can be downright astounding to wake up the next morning and see that the status update has been “liked” over a hundred times. Why on earth would people say that they like an announcement like that?

You have to remember, however, that this is a kind of social media code. Facebook doesn’t provide very many options for interacting on status updates. You can “like” the update, you can share it with other people, or you can comment on it. That is all.

When it comes to serious news, many people don’t know what to say, or they can’t think of anything appropriate to say. But they want to show their emotional support. If you were talking to them in person, they might put a hand on your shoulder, or smile at you, or give you a hug. They would give you some kind of non-verbal cue to let you know that they heard you, they feel sympathy, and they understand.

That is what “like” means, in these situations. Unfortunately, Facebook provides no “hug” button, and no “I’m really sorry to hear this, but I don’t know what to say” button. Perhaps it should. But until that happens, just understand that all of the “likes” on a tragic or sad status update are people showing emotional support.

If your dad is a microcelebrity, the mindset of the fans can seem very weird. These people don’t really know your father, but are acting and reacting as though they are family. They may be expressing enormous anxiety, or asking all kinds of questions that are none of their business. In your mind you are surely thinking, “But they’ve never even met him!”

In one sense, you are right. Social media can foster a sense of connection that is based on very little. But this is also partially just what “fandom” is in general. You also should remember that if your dad is an Internet celebrity, then this “feeling of connection” is at least partially his own creation.

If your father is not actually famous for something, such as being a singer or actor or politician, then his following has been nurtured by the force of his personality. Most likely he has been witty, interesting, and engaging with his fans. Most likely he has been interacting with them regularly, responding to their questions and telling them stories or jokes, anecdotes or opinions. His following is driven by a kind of “cult of personality.”

This doesn’t give them permission to be intrusive, nosey, or rude. But it means that you can be a little forgiving. The hundreds of people leaving comments on his profile, asking him about his health and why he hasn’t posted in so long, are strangers to you. But their feeling of connection is there for a reason. They’ve shared a history with your father, through his Facebook page. There is no reason to dismiss that is being fake. Those Facebook fans have been, for better or worse, part of your father’s life.

You don’t owe them anything

Having said that, however, the number-one rule for you to remember is that you do not actually owe them anything. You should never feel you have to post if you do not want to, and you should never allow them to “bully” you into giving more information than you feel comfortable giving.

In some sense, this should be a general human rule that applies equally well to everyone, whether your father has a hundred followers or a million. A time of loss and tragedy is personal, and you are coping with a lot. If you just want to shutter his Facebook profile and never look at it again, that is absolutely your right. You will be doing nothing wrong, if that is your decision.

However, you may want to do your father’s fans a kindness, and give them at least one final message goodbye. After all, if your dad was very active on Facebook, it is probably what he would have done, if he was able.

How much information is too much?

The last question my friend asks in his letter is probably the most difficult. How much detail about someone’s health or death is too much to give to social media fans on the Internet? The answer has to be: this is entirely up to you.

There is no right or wrong answer. If you want to share information about the funeral, you should feel free to do so. But keep in mind that some people on the Internet are crazy, and if you want your funeral to be a private affair then it is probably best not to share times and locations with a bunch of strangers.

But you don’t have to understand. The fact is, it was part of his life. His social media fans and presence were something that he cared enough about to put energy and emotion into, and he built up a fan base. So when you say goodbye to them, say it firmly but kindly. When the time comes, you may want to keep it simple:

I’d like you all to know that [my dad] has passed. I hope you understand that we are keeping the details and funeral arrangements private and within family. But I know that his Facebook community and all of you were very important to him, and he appreciated you very much. I won’t be responding to comments on here, but feel free to leave your well-wishes if you would like it. We will all miss him.

That should be enough to satisfy your loved one’s Facebook fans. After that, don’t worry about it. Some people may still make odd and nosey requests for information, or may even say things that seem inappropriate. But in terms of “social media etiquette,” you’ve been as considerate as can possibly be expected. After all, in times like this, you do have more important things to deal with.