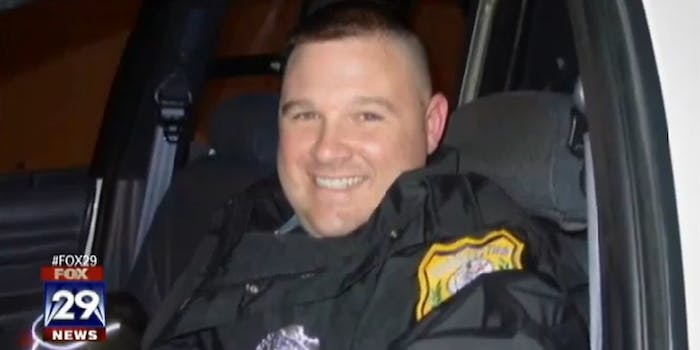 Officer Jeffrey Tyther is accused of using the New Jersey motor vehicle database to look up a woman’s personal information and attempting to friend her on Facebook, according to NJ.com.

Authorities believe that Tyther, 44, ran a woman’s license plate on the NCIC motor vehicle database on Sept. 9, after encountering her while on-duty. Police officers know that the database records every action performed and is supposed to be used only for official purposes.

“[Tyther] was on patrol and apparently a female motorist drove past him in her vehicle and in a marked police cruiser he pulled up behind her and then pulled up next to her and waved at her,” Jason McLaughlin, the Public Information Officer of the Camden County Prosecutor’s Office, told MyFox Philadelphia.

He then used the personal information that he obtained from the database to find her and friend her on Facebook a few days later. When she did not respond, Tyther emailed the woman and let her know that he was the officer who waved at her earlier in the week.

“At that point I think that unnerved her and she talked to a co-worker about it, and through that person police were notified,” McLaughlin told CBS Philly.

Tyther surrendered to police after the charges came in on July 23. He has been charged with second-degree computer theft and violating the motor vehicle record law. If found guilty he could face up to 10 years in prison.

That’s a steep price to pay for one potential Facebook friend.