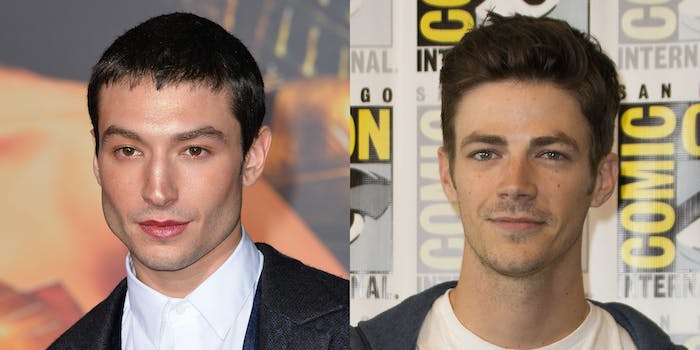 Miller may be removed from the 'Flash' franchise due to reports of violent and erratic behavior.

Warner Bros.’ Flash franchise is in turmoil this week, with the studio reportedly “pausing” any future projects involving The Flash star Ezra Miller.

This comes after Miller was arrested in Hawaii for disorderly conduct, and (in a separate incident) accused of robbing and threatening to murder a couple who were staying at the same hostel. Behind-the-scenes reports also describe Miller behaving erratically while filming The Flash, which is due to come out next year.

If Warner Bros. does end its relationship with Miller, that’s a major blow to the studio’s two biggest franchises: Fantastic Beasts and the DCEU. After debuting as the Flash in Justice League (2017), Miller was set to launch an ongoing solo franchise. They also play Credence Barebone in the Fantastic Beasts movies—a character who shares screentime with Grindelwald, who was recast due to Johnny Depp‘s domestic abuse allegations.

All in all, it’s a decidedly messy situation for both franchises. But some DC fans have a simple solution for the Flash movies: Just recast Grant Gustin in Miller’s role, continuing Gustin’s eight-year stint on the CW’s TV adaptation.

Gustin has been playing Barry Allen/The Flash since 2014, and the general consensus is that while The Flash TV show isn’t very good, Gustin is personally great in the role. To many fans he’s the definitive live-action Flash, which is why Justice League director Zack Snyder had to explain why he didn’t cast Gustin instead of Miller back in 2016. (Apparently, Gustin just wasn’t “a good fit.”)

Despite this vocal contingent of fans asking Warner Bros. to give Gustin a promotion, the chance of this actually happening is slim. Nine seasons on a CW show does not guarantee that someone will be a bankable movie star. However, it would be surprisingly simple for someone to replace Miller, whether or not that’s Gustin.

The upcoming Flash movie is going to be a multiverse story, featuring a crossover between separate cinematic universes—for instance, it features both Michael Keaton and Ben Affleck as Batman. So if Warner Bros. removes Miller from the franchise, it can just say the replacement actor comes from another universe.

The Daily Dot has reached out to Warner Bros. for comment via email.