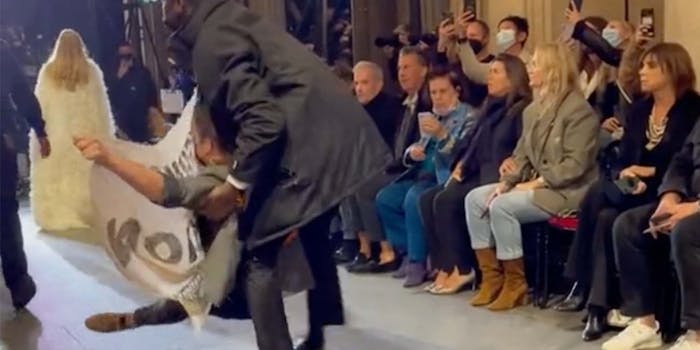 'It's peaceful and impactful.'

During the Louis Vuitton Paris Fashion Week show at the Louvre, a protester from France’s division of Extinction Rebellion walked the runway with a sign that read “OVERCONSUMPTION = EXTINCTION.” She was able to take only a handful of steps before security guards grabbed her and carried her off the runway.

Fashion blogger and former America’s Next Top Model judge Bryanboy posted footage of the protester’s appearance at the show on TikTok.

“Y’all don’t wanna hear it but she is 100% right,” commented @daendao on Bryanboy’s video of the protestor walking the runway.

“This literally the time and the place for this protest,” wrote @ellsc2323. “It’s peaceful and impactful. She strutted that runway momma.”

In a tweet about the protest, Extinction Rebellion France that LVMH (also known as Moët Hennessy Louis Vuitton, Louis Vuitton’s parent company) and Paris Fashion Week are symbols of French fashion, making both good venues to “recall the impact of [the fashion] industry.”

Commenters on Bryanboy’s video of the protestor being tackled agreed with the group’s timing.

“You need to check your priorities if you think that a model having to step around someone for a second is more important than environmentalism,” wrote @mildsalsaa.

“This is literally the only place,” @astrasfall commented in response to commenters saying that the protest was at the wrong time in the wrong place.

And in addition to applauding the movement, many on Twitter gave the protester credit for her runway walk.

“She walks better than Gigi and Kendall,” tweeted @charmbracelxt.

“She had a good walk as well,” @maidenamiano tweeted. “I thought she was part of the show.”

Though most were just confused as to how she got in to the fashion show in the first place.

“What Gossip Girl episode is this,” tweeted @inatessie.

Bryanboy, Extinction Rebellion France, and LVMH did not immediately respond to the Daily Dot’s request for comment via email.