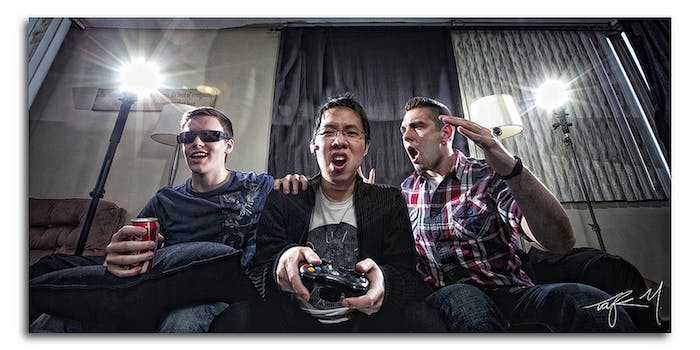 Vancouver's EXP Bar was meant to be a haven for gamers, but British Columbia's Liquor Control Licensing Board hit the establishment with a game console ban. Now an online campaign is looking to get the dream-crushing restriction lifted.

That’s the message the government of British Columbia gave entrepreneur Brian “Danger” Vidovic when he attempted to open a restaurant that catered to the Vancouver gaming community.

EXP Bar was to offer gaming-themed cocktails, a menu loaded with food on sticks or otherwise suitable for single-handed noshing, and, of course, huge screens and games at every table. Vancouver is a significant hub of global game development, and with a site located downtown just a couple of blocks from Gastown (a favored locale of the local tech community), it looked like Vidovic’s EXP concept was a sure bet.

That was before the Liquor Control Licensing Board of British Columbia hit the pause button.

“EXP was originally expected to open in October of last year, but the City’s permit process took an excruciatingly long time. Our costs for plumbing and electrical each tripled as well, so we needed to start a fundraiser to recoup some of our potential losses. We are now slated to open in mid-to-late July.”

In the meantime, the LCLB decided that EXP wouldn’t be allowed to have gaming controllers at the tables. EXP said OK, people can bring in their own. Then the LCLB decided they’d been too lenient and banned all gaming consoles as a condition of their getting a liquor license.

As every good gamer knows, when the direct approach fails, you start trying workarounds. Vidovic took to IndieGoGo, Canada’s answer to Kickstarter, in an attempt to raise the last of the funds necessary to open the doors, license or no license.

The different donation tiers are named for different gaming terms: a $10 donation is a “Power Pellet” while a $7500 donation makes you an official “Saviour of the Galaxy” and comes with permanent VIP status, 20 percent off your bill for life, naming rights for the VIP section (imagine the bragging rights on D&D night for the “Skippy the Klingon VIP section!”), and of course, a menu item named after you. They’ve already had several four-figure donations, but need about $8,000 more to make their goal in the next two weeks.

There is also a Change.org petition against the console ban, which currently has 2,809 signatures.

“The idea is to open with or without games and then work to put them back in should we not be able to remove that condition,” Vidovic said. “We need to operate as our funds would run dry if we waited, so worst case scenario, we will be a game-themed restaurant and bar that will show events, play music and serve dishes themed entirely around video game and geek culture.”

Thus far, he and his partners have invested about $300,000 in EXP. With rent at $7000 a month, they obviously can’t allow the place to stay closed. Why would the LCLB do this to a startup?

The board has not yet responded to a request for comment on EXP’s particular case, but they are essentially a government-run monopoly, with the power to do whatever they see fit. However, BC’s notoriously wacky liquor laws have taken a beating recently.

We asked Vidovic, “Is Vancouver really No Fun City, or is this just some well-meaning bureaucrat who’s making an error?”

Vidovic replied, “The only error I see is a lack of due diligence on the part of the LCLB to investigate new concepts and business ideas rather than to reject all new applications based on a single line in a policy manual. Vancouver is a ‘No Fun City’ because the attitude to liquor is to restrict everything first, punish people for circumvention later. No new business concepts are allowed, and people are discouraged from even trying because they fear that their business will be harassed.”

He explained that EXP is the only bar with a license that says “‘the use of gaming consoles is prohibited’ without any clear definition on what a gaming console actually is in [the LBLC’s] eyes. We assume the major video game consoles like the Xbox, PlayStation and Nintendo Wii as the basis for this. Without educating a liquor inspector on what that means, we run the risk of one person holding the keys to my business that I have no control over. Having a few people on their iPads could result in us getting fined or shut down should that person want to follow that term to the letter.”

“We decided it was time to take the fight to the LCLB and ask for everyone’s support in changing the liquor policy for the betterment of every business in BC. My final point is just that the policies and processes for small business need to change. These situations are encouraging small business to leave BC. If I had planned to open anywhere outside of BC, I’d be open last year.”