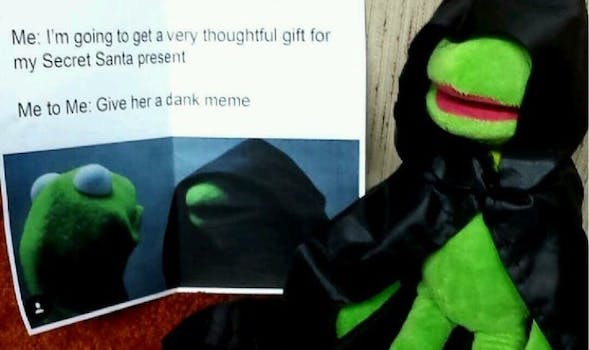 Me to me: This present rules.

Evil Kermit, the meme that represents the devil on all of our shoulders, was one of the most important and satisfying of the year. So it stands to reason that if you’re going to give a Christmas gift to a meme fan, an Evil Kermit doll is a pretty dank option.

this is the best secret santa present I have ever seen https://t.co/aIGg9Anzzz pic.twitter.com/Cy454zpEKs

Seen on Reddit, but not part of Reddit’s official Secret Santa exchange, this Evil Kermit plushy took “me to me” and made it “from me to you.”

Redditor beesaredope, the lucky recipient of the dank meme doll, explained that it was part of a gift exchange among close friends, so their secret Santa knew exactly what to come through with.

“They knew I loved memes, which is why I got this,” they wrote.

And the gift actually wasn’t as meme-tastic as intended. Santa originally wanted to mash it up with Dat Boi, the unicycling frog, but it didn’t work out.

“He also told me that he wanted to throw in a unicycle to pay hommage to Dat boi, so it’s like 2 memes with 1 gift haha but oddly enough small unicycles are hard to find???”

Still, a pretty excellent gift. And it even came with a buttload of Reddit karma. The post about Evil Kermit is sitting near the top of r/pics, one of Reddit’s most popular forums.

I imagine the recipient’s thought process went something like this:

Me: This gift is cool.
Me to me: Exploit it for Reddit fame.