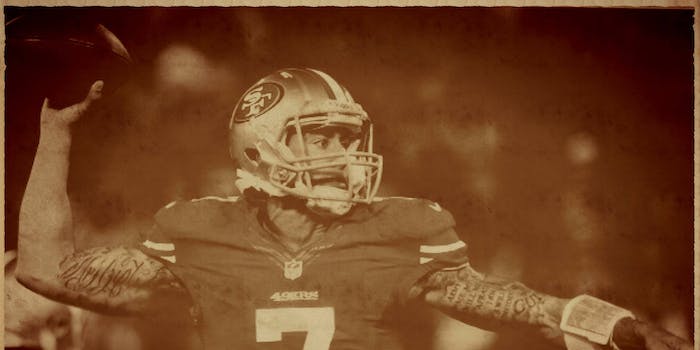 Colin Kaepernick should be ashamed of himself

San Francisco 49ers back-up quarterback Colin Kaepernick has been in the news a lot lately and, to be honest, for all the wrong reasons.

As a lifelong 49ers fan going back to the days of Joe Montana and Steve Young, I reflexively have a certain fondness for anyone commanding the Niners’ offense. However, as a proud American, I can no longer stay silent. Even as a second-string player, Kaepernick is a role model, as are all high-profile professional athletes. Children of all races, creeds, and colors look up to Kaepernick, which is why his actions matter.

I believe in the First Amendment to the Constitution. I believe the Founding Fathers were a bunch of pretty smart guys, who knew what they were talking about when it came to building the foundation for the single greatest country ever to grace God’s green Earth. The Founding Fathers wanted people like Kaepernick to be able to voice their opinions without fear of sanction or reprisal. Kaepernick has a right to speak his mind, just as I have a right to say what Kaepernick advocates is dangerous for America.

When Kaepernick was ten he got an African spurred tortoise as a pet. At the time, it could fit into the palm of his hand and in a shoebox. Today, it weighs half a linebacker and could live to be 135 years old

since kaepernick is a hot topic these days can we take a quick second just to acknowledge his pet tortoise ? pic.twitter.com/1K6asWs894

We should focus less on what Colin Kaepernick says and more on the fact that he has a 115 lb tortoise pic.twitter.com/8EjHBADP5r

I don't even like football but now I double like Colin Kaepernick because look at his pet tortoise pic.twitter.com/ntPNvBVCvV

Kaepernick may think giant tortoises make great pets. But he’s wrong. They’re bad pets—terrible, horrible, no good, very bad pets. Every time he holds up his tortoise, Sammy, he is disrespecting the legions of proud golden retrievers who have, for generations, made America great.

Now, I’m not an expert on tortoises. I don’t know if it’s an amphibian, reptile, or even the tea lizard who watches me from afar in my dreams at night.

(Oh, how I can hear your smugly self-satisfied sipping, tea lizard. My nightmares are none of your business, yet you sit in judgment regardless. Don’t think I can’t see you, because I’m watching you just like you’re watching me.)

All I know is that Kaepernick is so gung-ho about his tortoise ownership that Sammy has his own Twitter account.

Every time Kaepernick takes a stand with Sammy, it sends the message that people should get tortoises as pets. However, people need to understand the risks that come with keeping a tortoise around the house.

“The American Tortoise Rescue issued a warning about the mammoth pets, asking the pet industry and breeders to stop selling sulcatas, and asking consumers not to buy them, at least not without knowing their full story,” the San Jose Mercury News charged in 2013.

“When they are older, it’s impossible to keep them indoors—they crash through walls and destroy furniture—and it’s difficult to contain them inside a yard, where they eat everything in sight. There is no resale market for the behemoths and even zoos have stopped taking them. In Southern California, people have taken to turning them out in the desert, which is not a good solution. The tortoises are native to Africa, not California.”

Sammy reportedly has a history of destruction. He’s torn up the Kaepernicks’ backyard and hungrily devoured family swimwear. On three separate occasions, Sammy fell into the swimming pool and had to be rescued by humans because African spurred tortoises can’t swim.

It’s funny how turtles seem to be tough and independent when they’re teenage mutant ninjas, but they always come crawling back to humans when they need protection from water. Oh, did I say “funny?” I meant “not funny” because it’s serious. Deadly serious.

It’s high time tortoises come to respect the lifeguards who keep them safe, as well the cobblers who turn their scales into beautiful, fashion-forward footwear.

The Daily Caller notes there might be an ulterior motive behind Kaepernick’s taking up this issue as his cause célèbre: “The reality of the situation is that Kaepernick’s star is fading, and has been for several seasons. He’s desperate to hang onto any sort of relevance, and this might be his final chance to grasp onto life in the NFL. He will likely be cut in the near future and out of the NFL before anybody realizes he’s even gone.”

What do you think? Is Kaepernick a hero for speaking up about the joys of tortoise ownership or is he the single worst monster in the history of human existence? Is Kaepernick’s position quickly becoming mainstream, with even people like former House Speaker Newt Gingrich issuing similar rhetoric?

I’m interested in hearing your take. Please lean your head out the window and shout your opinion at the nearest cloud.