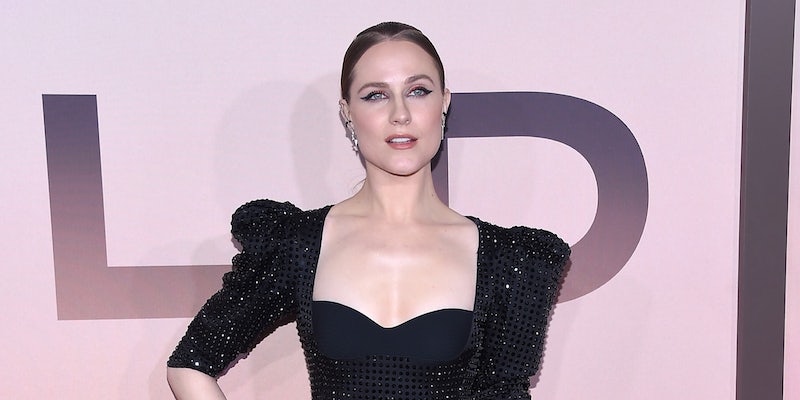 'For my fellow survivors who got slapped in the face this week.'

Evan Rachel Wood performed a poignant cover of New Radicals’ “You Get What You Give” at Los Angeles’ Bourbon Room Saturday night, giving a literal middle finger directed toward her ex Marilyn Manson as well as a message to survivors.

Taking to the stage with her Evan + Zane bandmate Zane Carney, Wood told the crowd that “I’ve been saving this, but it seems like an appropriate time” before starting the cover of “You Get What You Give.” It’s a much slower and poignant rendition than the original, and for much of the song, it’s a pure showcase of Wood’s vocals.

It’s not until Wood nears the end of the song when she changes things up a bit. The original lyric goes, “Fashion shoots with Beck and Hanson/Courtney Love and Marilyn Manson,” but Wood omitted Love’s name, letting the silence ring until she sings Manson’s name while flipping him off. In response, the crowd cheers.

“Fashion shoots with Beck and Hanson/…Marilyn Manson/We’ll all come right to your mansions/Come on, we’ll kick your ass in!” she sings.

It’s much more than a random flipping off of Manson. Earlier this year, Wood named Manson (who she was in a relationship with from 2007 until 2010) as her abuser and accused him of grooming, manipulating, and abusing her.

“I am here to expose this dangerous man and call out the many industries that have enabled him, before he ruins any more lives,” she wrote at the time.

But more recently, Manson—who faces a multitude of legal issues including a lawsuit from Esmé Bianco that alleged sexual abuse—got a moment in the spotlight that, for some fans, felt like a slap to the face. Last week, during one of his listening parties for Donda, Kanye West brought Manson onstage with DaBaby (whose homophobic rhetoric resulted in him being removed from multiple music festivals). Some saw West bringing Manson as an attempt to rehabilitate him after being “canceled,” and one that would be triggering for many survivors of sexual abuse.

It’s that incident that Wood appears to reference in her performance and Instagram post as she once again expressed solidarity with survivors.

“For my fellow survivors who got slapped in the face this week I love you,” Wood wrote on Sunday. “Don’t give up.”