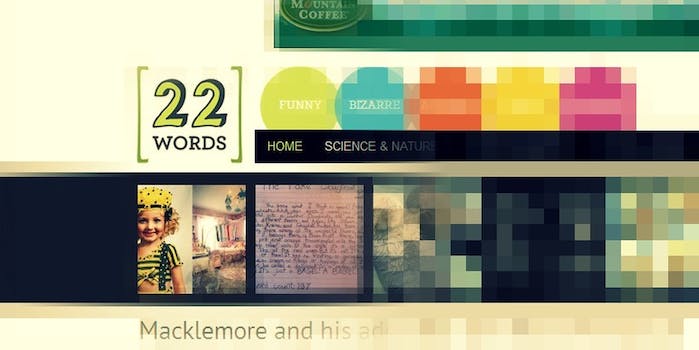 22 Words, the second-most shared site online, is run by one guy.

The second-most shared website on the internet doesn’t belong to a heavily staffed blog or one of the old media giants.

It’s an aggregational site run by one man who’s fueled by coffee, Coors Light, and a desire to share the most awesome stuff he finds every day on the Web.

In a revealing Q&A with Esquire’s Ned Hepburn, Abraham Piper, the founder and human engine behind 22 Words, talked about how he got the site started and what made it blow up over the past few months.

“I try to manage the site so that on the whole it comes across sort of like a likable friend — intelligent but not superior, goofy but not inane, sentimental but not saccharine, and consistently interesting without being full of itself,” Piper told Esquire.

The formula is working. 22 Words is becoming ubiquitous on Facebook, with only similar aggregator Upworthy outpacing shares.