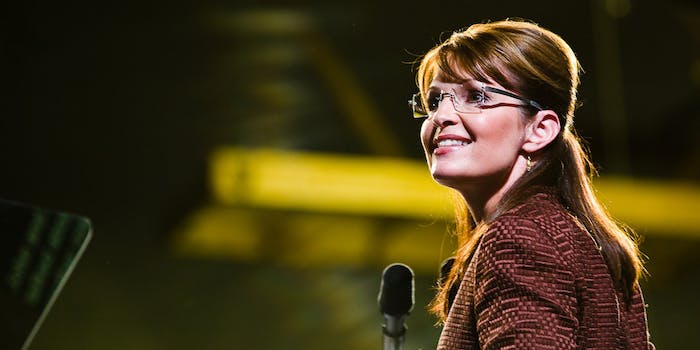 It's the kind of Twitter bot that loves hallucinogenics... and America.

Erowid is a website where people who tend to enjoy ingesting halluconogenic drugs can learn more about the substances they’re taking while writing about their experiences. Sarah Palin is someone who still exists on the national platform.

It makes perfect sense, then, that a Twitter account called Erowid Sarah Palin writes tweets befitting of a (fictional) Tea Party Republican who happens to be high on Molly.

First, an explanation from Daily Dot editor Miles Klee about what can be found at the Erowid website:

It’s a place where psychonauts share tripping stories—how much they did, what they saw, what they felt. It’s kind of like an earnest hippie drug-fueled Reddit. But people also are super condescending about drugs and how they should be done. So there’s a mansplainy bro vibe as well.

Or as Erowid explains, it’s “documenting the complex relationship between humans and psychoactives.”

Here’s some writing that appears on the site. This is from a dude who went on a Molly trip:

It was supposed to be an interesting experience, but I never expected it to go so far. Perception, thought, and memories became indistinguishable. My mind became a house of mirrors, but these mirrors were multi-dimensional, irregular, and rotated on all axis. I don’t remember which was the first to go, but both time and space relative to my physical self were lost. Much of that evening I cannot remember, most of that which I can didn’t actually happen. I felt my concept of right and wrong, and my formed personality melt away in a pool of entropy and instinct. If my perceived reality had been more coherent, I may have been a danger to others.

I saw what I believed to be the true nature of time, formed only by endless loops of thought. I witnessed an imagined event where the fabric of reality itself began to fold, simplify, and cross-cancel. Somehow everyone knew what was happening, but could not stop it. Time slowed, individuals’ reality fragmented, minds fractured, malfunctioned, and there was chaos. Everything structured fell, society crumbled, and morality disappeared. Somehow we knew at the climactic cessation of this event that we would all cease to exist, so none of this mattered anyway. All things began to take on a fractal nature, distilling into their constituent parts, for me everything seemed very sexual in it’s true nature, as reality unzipped into halves, then halves of halves, etc… The incessant beating of linear thought (abstracted time) became more and more pronounced, those around me began to sing along with reality as it flowed around us, only because there was nothing else we could do, all that was to be hoped for was silence, rest.

Meanwhile, you probably already know all about Sarah Palin. Now you’re ready to see some examples from Erowid Sarah Palin.

As my legs began to liquidize and colours started to run for president, Drill, baby, drill into another dimension.

I was on stage nominated for VP, and I felt nothing much at first, other than the joint, you betcha

I see a new commander-in-chief, one who will make America great again. The first bong hit was everything I expected and more.

So those of you, you hardworking Iowa families can I get a “Hallelujah!” anticipating my first changa bong hit.

Then my vision recedes again but the right side of the Constitution, the power to stop Obamacare, the plant spirit manifesting

I washed my hands of the establishment and the lamestream media, and they were imbued with broiling geometry and unutterable colours.

As Klee notes, “Stoners are prone to the same exact kind of word salad as Palin, so a bot remixing the two of them has a bizarrely cool consistency.”

If only Palin spoke the exact same way as Erowid Sarah Palin, perhaps Donald Trump, who Palin has endorsed, wouldn’t have finished second during the Iowa caucus. Because a Palin who spits out hallucogenic tales in her Alaskan accent would surely have created a winner across every state in America.