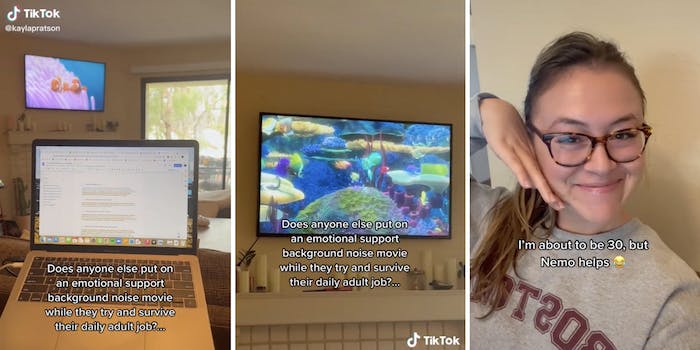 'It was to be something I've seen before for it to work.'

Everyone has a process when it comes to choosing media that helps get them through the workday. And while music is always a popular choice, working from home has only expanded the range of stuff we can put on.

For TikToker @kaylapratson, it’s more of a comfort movie that’s made working from home easier.

“Does anyone else put on an emotional support background noise movie while they try and survive their daily adult job?” she asked in a caption on the video. The video, which is set to King Khan and the BBQ Show’s ever-present-on TikTok “Love You So” soon reveals a TV that is playing the Pixar movie Finding Nemo.

As it turned out, plenty of people could relate. The clip has garnered 88,600 views since being posted last week.

“Omg me literally everyday,” @simonedped commented. Another person was relieved to find out that they weren’t alone. More people started listing off the many movies (and oftentimes, shows) that they watched over and over again as comfort watches. Among those selections were The Office, Friends, a plethora of animated Disney movies, and Spirited Away.

The point of a comfort movie, or as @kaylapratson put it, “an emotional support background noise movie,” playing in the background isn’t something to watch to avoid whatever you’re doing. It should probably be something you’ve seen before and seen multiple times so that you’re not sucked into getting engrossed, but because you’re very familiar with how things play out, you’ll know exactly where in the movie you are or how a scene will play out if a bit of dialogue or music catches your attention.

“Yes! It has to be something I’ve seen before for it to work,” @pabloyhondo wrote.

Comfort watches have existed long before the pandemic led more people to work from home, so it’s not exactly a new and novel idea. But an expansion of what work looks like is leading some people to take that principle and apply it to make it work as they work.