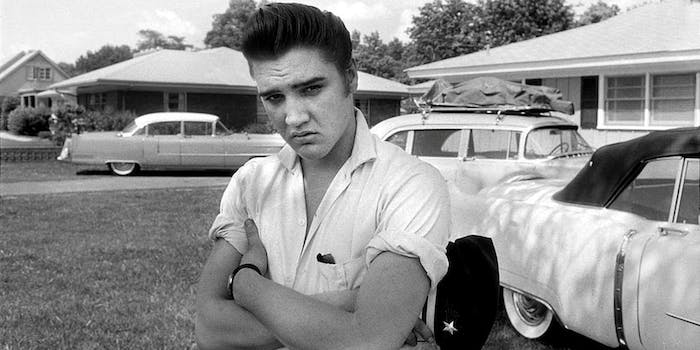 Musicless Musicvideo creator Mario Wienerroither takes on the King himself.

Since he succeeded in making David Bowie and Sir Mick Jagger look ridiculous, Musicless Musicvideo creator Mario Wienerroither has set his sights even higher. This time around, he’s taking on the King himself, Elvis Presley. And as usual, awkward hilarity ensues.

If you want to get technical about it, Wienerroither’s latest isn’t actually “musicless.” In the 46-second video, which is excerpted from a Paramount Pictures screen test, Presley plays “Blue Suede Shoes” on an acoustic guitar—or, more accurately, he mimes playing along to the song’s studio recording. This inherently artificial setup gives Wienerroither ample opportunity to overlay all sorts of bum guitar notes, along with his trademark squeaks, footsteps, and “spastic human noises.”

Compared to previous Musicless Musicvideos, it’s a pretty simple setup. But thanks to Wienerroither’s attention to detail, the results are as hilarious as ever, especially when Elvis’s shoes (which, oddly, are neither blue nor suede) get to squeakin’.

The Daily Dot recently interviewed Wienerroither to talk about his process for creating Musicless Musicvideos. One of the insights he shared was, “The harder the artists try to look cool, the funnier … it gets in a musicless video.” Since no one ever tried harder to look cool than Presley, it’s no wonder the musicless “Blue Suede Shoes” works so well.

So who will go under Wienerroither’s sonic knife next? The Beatles? Madonna? Justin Bieber? Whoever it is, it’s a safe bet they’ll be wearing squeaky shoes.

Photo via the hartford guy/Flickr (CC By SA 2.0)