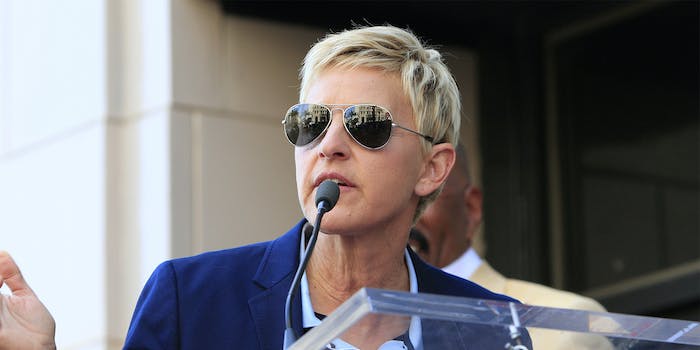 Celebrities are defending Ellen DeGeneres, but it’s hard to take them seriously

Katy Perry, Ashton Kutcher, and Kevin Hart have all spoken out in defense of Ellen DeGeneres, whose show is currently being investigated for an alleged toxic work environment.

But in light of what those allegations actually mean, this kind of celebrity support is hard to accept as a meaningful defense. If there’s anything we’ve learned from the past few years of Hollywood abuse revelations—whether its racial discrimination, sexual harassment, or psychological abuse—it’s that famous, successful individuals are often shielded from repercussions by their power and connections within the industry.

Over on Instagram, we have Kevin Hart saying “the internet has become a crazy world of negativity,” and defending DeGeneres on the grounds that “she has treated my family and my team with love and respect.”

Then on Twitter, Ashton Kutcher said, “I haven’t spoken with @TheEllenShow and can only speak from my own experience. She & her team have only treated me & my team w/ respect & kindness.”

And Katy Perry tweeted, “I know I can’t speak for anyone else’s experience besides my own but I want to acknowledge that I have only ever had positive takeaways from my time with Ellen & on the @theellenshow.”

These three posts are similar enough in tone and format (“Ellen treated me and my team well”/”I can’t speak for anyone else’s experiences but…”) that you might speculate they were inspired by a similar source. Say, a friend asking them to post a public defense on social media. But that’s just speculation. The actual content of the tweets is clear, though: These wealthy Hollywood celebrities were all treated well by DeGeneres and the staff of her show.

There have long been rumors that DeGeneres is difficult to work for, much in the same way that TV writers privately warned each other about Hawaii Five-0 and MacGyver boss Peter Lenkov for years before he was fired by CBS last month.

In the case of the Ellen Show, the allegations began to surface publicly during the early weeks of the coronavirus pandemic, when Ellen crew members were “distressed and outraged” over drastic pay cuts and the potential for unsafe working conditions.

Meanwhile, Jimmy Kimmel had begun paying stagehands out of his own funds during shutdowns, and other talk shows were continuing to pay full rates to their staff. DeGeneres has an estimated net worth of $330 million.

This proved to be a tipping point, with BuzzFeed News publishing a series of interviews with current and former Ellen Show staffers, saying they were bullied at work, punished for taking bereavement days, and experienced racist treatment at the hands of Ellen managers.

A second BuzzFeed News report shared multiple accusations of sexual misconduct surrounding executive producers on the show. Based on the wide-ranging nature of these allegations, it seems like the Ellen Show was indeed an unpleasant workplace for many employees. It’s a particularly jarring revelation in the context of Ellen DeGeneres’ warm-and-cuddly image and unofficial motto: “Be Kind.”

By definition, junior employees have a very different perspective compared to celebrities who have a personal relationship with DeGeneres. So while the statements from people like Kevin Hart and Katy Perry are a very public defense of DeGeneres and her show, they’re not actually relevant to the allegations at hand. They merely highlight the way people in power often have different experiences from everyday workers.