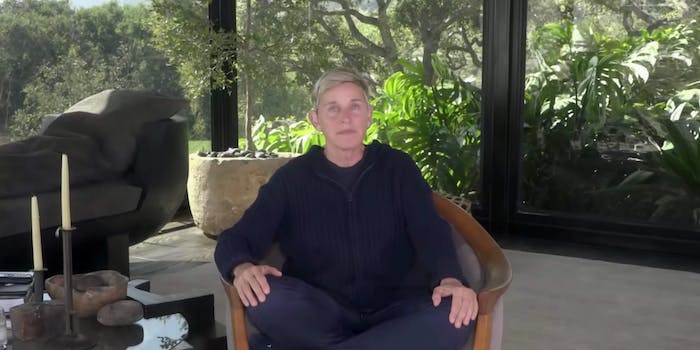 Petition calls for Ellen DeGeneres to be replaced by Ellen Page

During the coronavirus, TV hosts have found new and often fascinating ways to continue making their shows from home, but as Ellen DeGeneres’ controversial return to TV demonstrates, it hasn’t worked for everyone. Now, some are calling for her removal with a suggestion to replace her with another Ellen.

The Change.org petition, which has over 6,600 signatures and counting, has a simple premise: it’s asking that Ellen Page become the host of The Ellen DeGeneres Show (which is often referred to as Ellen).

It’s a petition that’s kind of silly, has some iffy wording, and has basically zero chance of coming to pass. DeGeneres hosts the consistently highest-rated talk show, and last year, she signed a three-year deal to continue hosting Ellen until 2022. Her show’s general message to be kind to one another is vastly appealing and about as apolitical as you can get for DeGeneres’ target audience. She’s one of the most visible LGBTQ entertainers in the U.S. and she’s been incredibly influential over the past couple of decades.

(Plus, if this were to hypothetically even have a chance fo happening, who knows if Page is even interested.)

But what it does highlight is just how frustrated some have become with DeGeneres—who they see as having become privileged due to her vast wealth and completely out-of-touch comments—in the past few years.

Last year, she was photographed watching a football game with President George W. Bush, which received vast criticism because of Bush’s support for banning same-sex marriage and his role in the ongoing war in Iraq. While DeGeneres defended her decision to be friends with people she doesn’t always agree with and lambasted those on Twitter who called her out, others took to highlighting the consequences of the war that began during the Bush administration even as the original outcry did. She supported Kevin Hart to host the Oscars after his old homophobic tweets resurfaced online.

Last week, upon her return to her show, DeGeneres compared quarantine during the COVID-19 pandemic to prison, which felt especially tone-deaf as confirmed COVID-19 cases in prisons continue to rise—not to mention that DeGeneres’ quarantine in her vast home is likely a much different experience than those who lived in cramped spaces, with vulnerable family and friends, or are quarantined in dangerous living situations.

“One thing that I’ve learned from being in quarantine is that people—this is like being in jail, is what it is,” she said in a video that’s since been taken offline. “It’s mostly because I’ve been wearing the same clothes for 10 days and everyone in here is gay.”