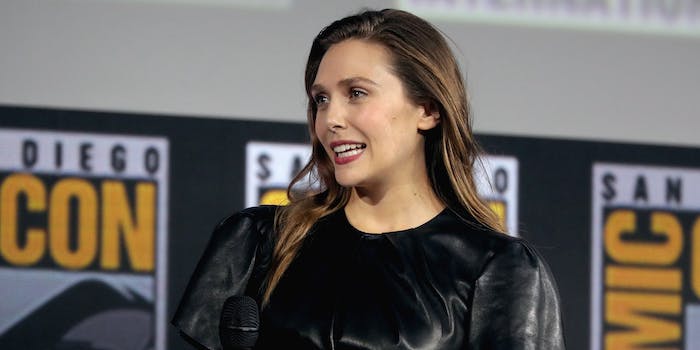 There are two types of people in the world: those who know that actress Elizabeth Olsen is the younger sister of Mary-Kate and Ashley, and those who don’t. Thanks to the success of WandaVision, a lot more people are visiting the younger Olsen’s Wikipedia page and discovering the truth.

For many WandaVision fans, this information is eye-rollingly obvious. Elizabeth Olsen doesn’t exactly hide her background, and she’s been an established Hollywood name since her breakout role in Martha Marcy May Marlene (2011).

On the other hand, “Olsen” isn’t an unusual name. There are other Olsens out there besides Mary-Kate and Ashley. And since Elizabeth’s best-known roles are either in adult dramas or the Avengers franchise, people don’t automatically associate her with the Olsen twins’ public image. We typically think of the Olsen twins as upbeat 1990s child stars or gamine fashionistas in the 2010s.

In fairness, Mary-Kate and Ashley Olsen haven’t really sought out the Hollywood spotlight during the peak years of Elizabeth’s success. They moved away from acting in the mid-2000s, embracing new careers in the fashion industry. Meanwhile, Elizabeth, who is three years younger than the twins, had a more typical childhood before she pursued a professional acting career as an adult. She did have a couple of cameo roles in her sisters’ projects, but otherwise she went to school and then college (Tisch School of the Arts), before breaking out at the age of 22 in Martha Marcy May Marlene.

For an actress who started out with a pair of much-more-famous siblings, Elizabeth Olsen may well be glad that she’s now seen as independently successful, with many viewers not realizing that she’s Mary-Kate and Ashley’s sister at all.