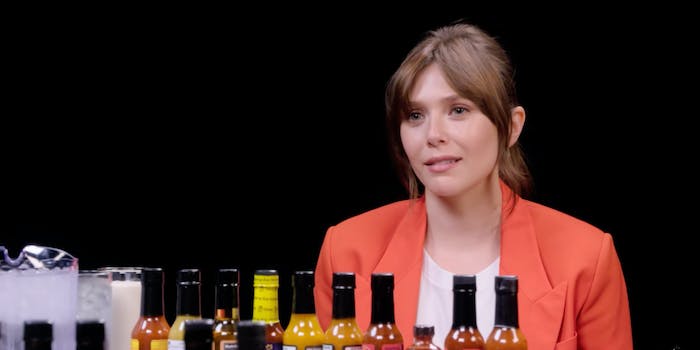 Elizabeth Olsen conquers ‘Hot Ones’ and becomes a meme

She barely broke a sweat.

A lot can happen on an episode of Hot Ones, the interview series where celebrities’ tolerance for spiciness is put to test. You can reach the end of the interview without any major wing faux pas. You can tap out or call for a milk reprieve far earlier than you expected. Or, if you’re Elizabeth Olsen, you can follow in Paul Rudd’s footsteps and come out of the interview an instant meme.

Olsen, who appeared on the June 17 episode, fared far better than many of Hot Ones’ guests. She started off by telling host Sean Evans that “I think I’m OK” when asked how she handles spicy food. By the end of the interview, she conquered Hot Ones’ hot wings and admitted that she would try to be a bit more adventurous in her future encounters with spicy food.

There isn’t necessarily one clip of Olsen that made her appearance so meme-worthy, as was the case with Rudd. Instead, it’s several.

One of the bigger moments arrived after Olsen’s victory. Evans wrapped up the interview by “rolling out the carpet” and giving Olsen the chance to promote anything she wanted. Instead of doing that, Olsen talked about how she was having a great time in New York City. It’s the kind of aimless ramble that can come with putting someone on the spot.

Later, Tessa Thompson cemented Olsen’s New York tangent by bookending an Instagram post, which featured photos taken during a trip to New York, with Olsen being excited to be in New York.

Of course, her Hot Ones victory, especially compared to her fellow MCU actors, really cemented that, just like Scarlet Witch herself, Olsen is also the strongest Avenger. (And she fared a lot better than other guests, too.)

And some people were just here for Olsen’s very expressive face during the interview.

Let us raise a wing for Olsen.