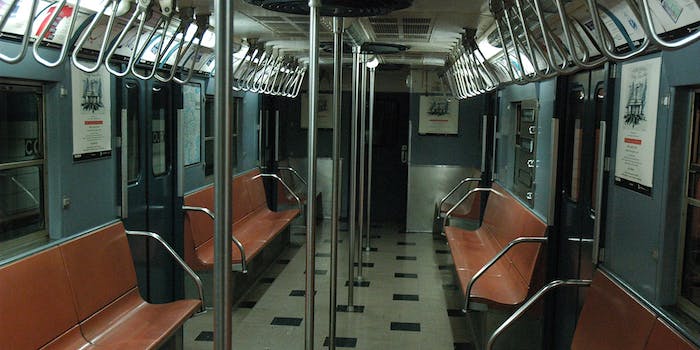 The victim's open and relentless campaign for justice undoubtedly played a role.

The New York City Police Department has arrested a man who was caught on video molesting a woman on the subway, nearly three years after the video was first uploaded to YouTube.

The man, 43-year-old Queens resident Carlos Chuva, has been charged with one count of felony sex abuse, a spokesperson for the NYPD’s deputy commissioner of public information told the Daily Dot.

The victim, Elisa Lopez, has been remarkably open about her assault, which occurred in 2012. In the years since the incident, she has repeatedly recounted to the media how she drunkenly passed out on the subway, en route to visit her boyfriend, and only learned of the assault later. After the original video was taken down, she posted a copy to her own YouTube channel in an attempt to identify the man who had violated her.

Jasheem Smiley, the man who recorded the assault, said his strategy was to first document it and then inform authorities, but he was unable to convince the Metropolitan Transportation Authority intervene.

It is likely that Lopez’s tenacity and openness about her assault played a role in Chuva’s arrest. She staged frequent rallies and repeatedly asked anyone who recognized the man in the video to call the NYPD’s Crimestoppers tip line, which lets anyone anonymously inform the police about a crime.

The NYPD said that Chuva’s arrest came from one of those anonymous tips.

“I feel happy that he’s going to be behind bars soon,” Lopez, a student at City College, told the Daily Dot. “I guess I’m making the best out of an unfortunate situation.”

Chuva is currently out on $5,000 bail, according to the Manhattan District Attorney’s office, one tenth the amount prosecutors originally requested. His next court date is not yet set.

Correction: An earlier version of this article incorrectly stated the amount of Chuva’s bail. It is $5,000.