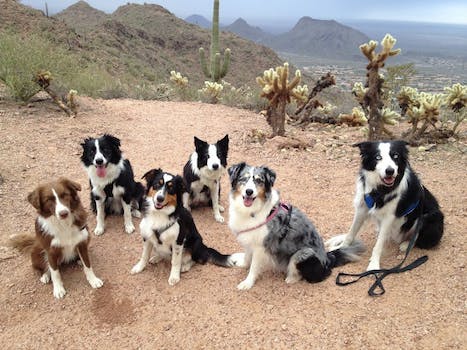 Elicia Caloun's online community is rallying to rescure her border collie, Tobie, who is missing in the Arizona desert after Calhoun fell asleep at the wheel Monday night and crashed her trailer.

After flipping her car and trailer Monday night, internationally-known dog trainer Elicia Calhoun wasn’t going to stay in the hospital. One of her dogs had died, three were being treated at a vet clinic, and two were still missing. And she was going to find them.

Luckily for Calhoun, she has help. Online, her community has rallied to save her pups. Nearly 4,000 others have organized on Facebook in less than 24 hours, ready to comb out across the Arizona desert and find the lost dogs.

Calhoun fell asleep at the wheel Monday night, losing control of her 2007 Honda crossover and clipping an 18-wheeler. Her six border collies were thrown from the car.

As Calhoun was being treated for her injuries, help shortly arrived in the form of Facebook wall posts. Pets Weekly, a pet newsletter with about 2,400 Facebook fans, provided running updates on the crash, and urged readers to help find the dogs. Others soon created a Facebook group—which already has nearly 4,000 members—and a fundraising page.

“I am so sorry for your loss. Maybe the love and support of others lift you up in your time of grief,” one anonymous donor wrote.

The group was greeted with sad news early Tuesday morning: Nika, one of the missing dogs, was found dead along the side of the highway.

There are no signs of Toby, the other missing dog. It’s been more than 18 hours since the crash, and the group is rallying to save him.

“We [are] concerned about dehydration and possible concussion,” Calhoun wrote on the Facebook page.  “Time is [of] the essence. Anyone in area who can come out to help search—we need bodies.”