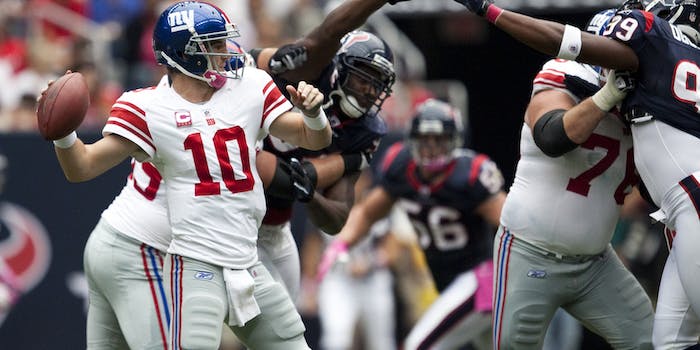 Viral video star and sometimes quarterback Eli Manning has not been having a great summer.

Viral video star and sometimes quarterback Eli Manning has not been having a great summer. After being the poster child for everything that’s wrong with the struggling New York Giants offense, Archie Manning’s prodigal son has a lot on his plate in advance of next weekend’s Giants season opener against the Detroit Lions. So how did he choose to get his head in the game? By doing a Reddit AMA, of course. And while it remains to be seen whether Eli will thrive under new offensive coordinator Ben McAdoo’s rejiggered offensive system, at least Eli will always have his jokes. Never change, Eli, just keep laughing.

The sibling rivalry is real.

But he does think Tom Brady is pretty cute, if that helps.

He also has no idea why the team is called the Giants.

He knows you guys think he makes dumb faces.

He knows he’s got moves, is sad EA Sports doesn’t give them the recognition they deserve.

What’s that you were saying about him throwing interceptions?

His biggest starstruck moment was with one of music’s most underrated heroes.

But he won’t hesitate to take sides in the battle for best boy band.

And his musical taste is impeccable.

He knows what he’s doing if this whole NFL thing goes south.

And when it comes to getting payback on Denver Broncos defensive end Demarcus Ware for sacking him the most, he knows which route to go.