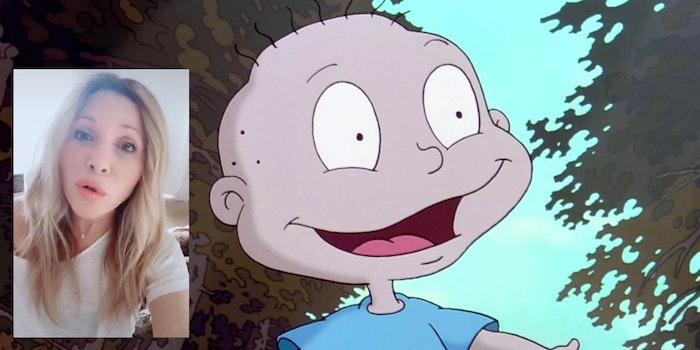 She is still voicing her iconic characters on the platform.

Though you may not have realized it, actress E.G. Daily was everywhere in the ’90s and aughts. Daily voiced a litany of iconic characters, most notably Buttercup from The Powerpuff Girls, “Babe” from Babe: Pig in the City, and of course, Tommy Pickles from the Rugrats franchise.

Recently, it came to the attention of BuzzFeed, that Daily—who is still a working voice actress, by the way—is active on TikTok, where she’s gleefully reminding people that she is Tommy Pickles.

Daily is also the mother to two early 20-something daughters, Tyson and Hunter, who do pretty impressive Tommy Pickle impressions of their own. But their mom is quick to remind them who the OG Tommy is.

It’s the giggle that takes it over the line of being disturbing, right? It’s got to be the giggle.

At any rate, Daily is also happy to brush up on her Buttercup voice—which she then follows up with the Tommy giggle, because of course, she does.

In addition to her voice work, most people probably don’t realize that Daily also appeared in a number of onscreen roles in the ’80s, including “Loryn” in 1983’s Valley Girl alongside Nicolas Cage, and “Dottie” from Pee-wee’s Big Adventure.

You may also have unknowingly spotted Daily as Phoebe’s former singing partner in the 1997 Friends episode aptly titled, “The One with Phoebe’s Ex-Partner.”

Perhaps most surprisingly, Daily is also responsible for singing the original Two and a Half Men theme song.

Yet, despite this impressive résumé, it seems as if the character of Tommy Pickles will always remain nearest and dearest to Daily’s heart.

In July of 2018, Viacom and Paramount Pictures announced a Rugrats revival with a return to the Nickelodeon series and live-action film—however, both projects were later pulled.