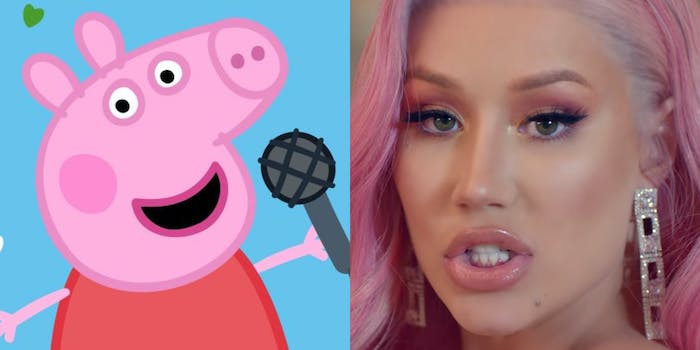 Iggy Azalea and Peppa Pig have an epic Twitter fight

Iggy Azalea and cartoon character Peppa Pig have some Twitter beef… or is it pork? The two are coming out with new albums on the same day, and things are starting to sizzle.

It started when Azalea announced the release of her new album In My Defense, which is set to come out on Friday.

This will be Azalea’s first album since her 2014 debut The New Classic, BuzzFeed notes.

The official Twitter account for Peppa Pig, the cartoon character from the Nick Jr. show by the same name, announced this week that Peppa’s new album is also dropping Friday.

“It’s over for me now,” she tweeted on Tuesday.

It’s over for me now. https://t.co/pWfsAgUbUz

Peppa responded with a tribute to Azalea’s 2014 bop Fancy.

And now Azalea says she wants to collaborate ASAP—or else Peppa might be fried bacon.

Collab with me now or you’ll end up a breakfast special peppa. https://t.co/WGTKhMknHb

So far, that’s the whole tea. Of course, this isn’t the first time Azalea’s gotten into a Twitter fight, as she’s beefed with celebs including Snoop Dogg and Bhad Bhabie in the past. But this might be her first pork roast.