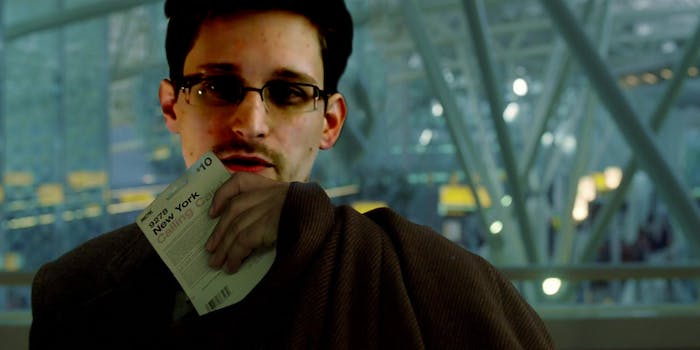 The NSA whistleblower, still trapped in a Moscow airport, has released his first statement since leaving Hong Kong.

Whistleblower Edward Snowden, stuck in a Russian airport but legally in international limbo, lamented the U.S. prosecution of him Monday.

“Although I am convicted of nothing,” he said in a statement released through WikiLeaks, the U.S. “has unilaterally revoked my passport, leaving me a stateless person.”

Snowden, 30, is the former NSA contractor who absconded from Hawaii to Hong Kong with a trove of classified documents that detail government spying, like the Internet surveillance program PRISM. After jetsetting around the world for asylum, halted by international politics, he’s been stalled in Moscow’s Sheremetyevo airport since June 23. This is Snowden’s first statement since leaving Hong Kong.

He didn’t go into detail about his next move. However, a Russian Foreign Ministry official, speaking on condition of anonymity, detailed Snowden’s most recent plan to the Los Angeles Times Monday. The official claimed Snowden met with Russian diplomats Monday morning and handed them appeals for 15 different countries.

Reuters cited an unnamed Russian official who claimed that Snowden had applied for asylum there.

Russian President Vladimir Putin reiterated his desire to neither help nor hurt Snowden Monday. “Russia has never given up anyone to anybody and does not plan to,” he said, echoing similar statements he made six days earlier. Russia has no extradition treaty with the U.S.

Neither does Ecuador, which earlier had appeared to be where Snowden would end up. Snowden did seem to reference disappointment that the U.S. had muddied his deal to end up there, due in part Vice President Joe Biden’s call to Ecuadorian President Rafael Correa.

Snowden’s full statement, posted on the WikiLeaks website, is reproduced below:

One week ago I left Hong Kong after it became clear that my freedom and safety were under threat for revealing the truth. My continued liberty has been owed to the efforts of friends new and old, family, and others who I have never met and probably never will. I trusted them with my life and they returned that trust with a faith in me for which I will always be thankful.

On Thursday, President Obama declared before the world that he would not permit any diplomatic “wheeling and dealing” over my case. Yet now it is being reported that after promising not to do so, the President ordered his Vice President to pressure the leaders of nations from which I have requested protection to deny my asylum petitions.

This kind of deception from a world leader is not justice, and neither is the extralegal penalty of exile. These are the old, bad tools of political aggression. Their purpose is to frighten, not me, but those who would come after me.

For decades the United States of America have been one of the strongest defenders of the human right to seek asylum. Sadly, this right, laid out and voted for by the U.S. in Article 14 of the Universal Declaration of Human Rights, is now being rejected by the current government of my country. The Obama administration has now adopted the strategy of using citizenship as a weapon. Although I am convicted of nothing, it has unilaterally revoked my passport, leaving me a stateless person. Without any judicial order, the administration now seeks to stop me exercising a basic right. A right that belongs to everybody. The right to seek asylum.

I am unbowed in my convictions and impressed at the efforts taken by so many.