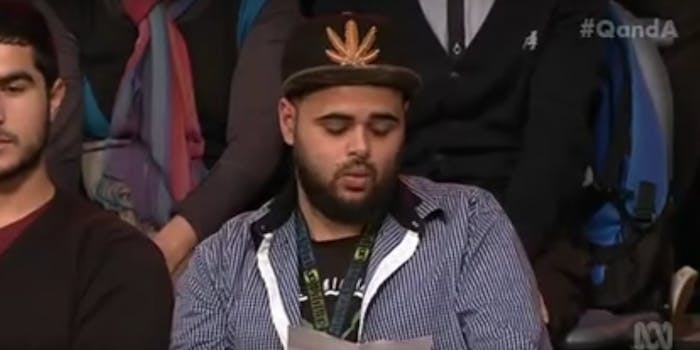 Everyone knows eBay. Usually they’re surprised it’s still kicking and that it’s still so successful. But not a lot of people in the United States, where eBay is based, know of Zaky Mallah. He’s an Australian activist who made national news after confronting Liberal MP Steve Ciobo about a criminal case made against him under the country’s anti-terrorism laws. Successfully staging a public face-off like this takes a lot of balls… or maybe a magic hat?

During the showdown Mallah wears a black hat with a golden pot leaf that he claims is the source of some of his on-air wizardry. Now he wants some other lucky schmuck with a whole lot of cash and a similarly shaped head—perhaps yourself!—to be the proud owner of a chapeau “with magical powers to disrupt live television.”

Except you can’t, because eBay delisted the item. For reference, here’s the controversial bit of Mallah’s wizard hat in action:

Mallah’s starting price was a cool $100, which is chill. But eBay was super not chill about the claims associated with the hat, insinuating that the “magic” description was gratuitous. He’s now taking the popular online auction site to court for $30,000, double the price he believes he would’ve gotten had the auction gone as planned.

It’s been weirdly difficult to impossible to find a replica of the magic weed hat, so maybe the thing was unearthed from the waters of Cairns and truly does contain some type of sorcery. Expect Mallah and his hat to unleash their powers at his January 19 lawsuit hearing.