Insane house comes up with insane method for making money on morgue refrigerators.

It’s an eBay auction to die for: one functioning, moderately freezing morgue fridge, “used” but “fully operational,” to the highest bidder, from the New York State Office of Mental Health.

That’s right, the Empire State’s Office of Mental Health is auctioning off a morgue refrigerator—a certifiable cold house for dead people—on eBay. The offer, which posted onto the online auction place last Thursday, is currently going for a cool $1,000, with opportunities to bid extending through Thursday night at 9pm Eastern.

The price-point begs the question of what exactly you’re getting.

According to the eBay posting, this particular morgue refrigerator is six feet by six feet by eight feet, with four drawers proven perfect for tasks like maintaining a chill on vegetables, ice, milk, or dead bodies. 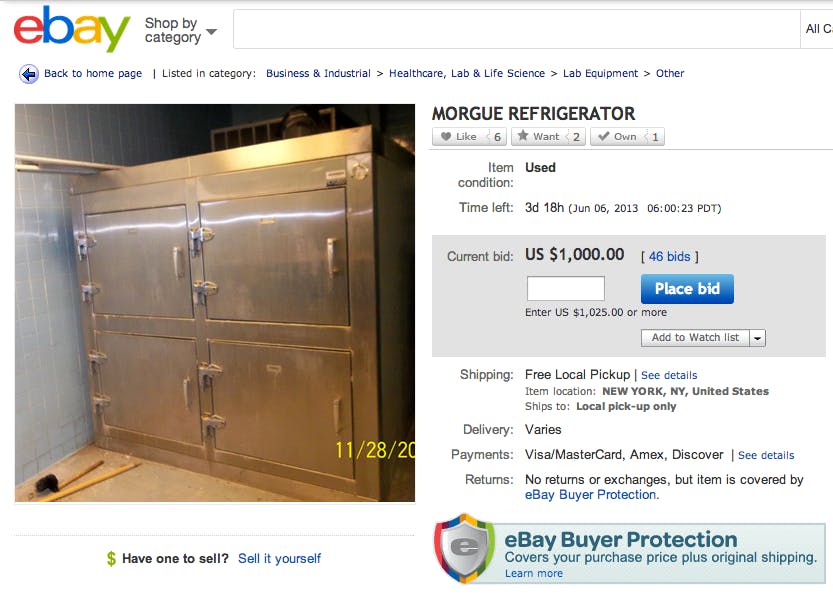 The item is being offered “as is with no warranty.”

“Known defects are listed, but the absence of any indicated deficiencies does not mean the item may not have deficiencies,” the listing reads. “The potential buyer is strongly encouraged to inspect item(s) prior to bidding.”

Speaking with the New York Post on Friday, Office of Mental Health spokeswoman said that anybody is welcome to bid on the item.

“Whoever buys it would have to come pick it up, so he or she would have to have some familiarity with [refrigerators] like that,” she said, adding that she had no idea who in the world would possible want to own any part of a morgue fridge.

For more information on the product, or to schedule an inspection, potential buyers should call Elliott Arnold at (646) 789-8382. Or just show up to the Office of Mental Health and say that you’re thinking about buying the morgue fridge. No chance anybody around there will think that you’re nuts.