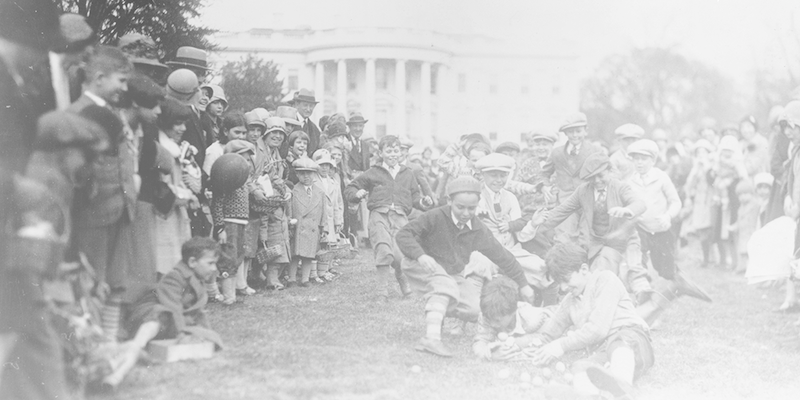 The 13 most interesting facts about Easter

The truth about chocolate bunnies, the legality of the Easter Egg Roll, and more.

Every year people around the world gather together to celebrate Easter. For many, it is a deeply religious holiday that honors the resurrection of their savior. Others simply see it as a time to hunt for colored eggs and eat candy with family. No matter how you celebrate, the history of Easter is a fascinating study in how cultures intermingle and how religious history becomes part of modern life. Here are 15 facts you should know about the Easter holiday come time for Sunday dinner.

1) Christians celebrate Easter as the day Christ rose from the grave, but he wasn’t the only one

Easter is a Christian holiday celebrating the day Jesus Christ rose from the grave following his crucifixion on Good Friday. According to Matthew 28, on the third day after Christ’s death, an angel of the Lord came down from heaven to the tomb, rolled back the heavy stone that had been placed in front to prevent Christ’s disciples from moving his body. The guards fainted, and Jesus left the grave, heading towards Galilee to meet up with his disciples.  We all know the story.

What you don’t know is that according to the Bible, when Christ came back to life he didn’t come alone. In Matthew 27:52-53 the Bible says, “and the graves were opened, and many bodies of the saints which slept arose, and came out of the graves after his resurrection, and went into the holy city, and appeared unto many.” You might think that’s just a metaphor, but Bible Probe says you may want to think again.

According to non-canonical manuscripts found in the Ante-Nicene Library—that is, texts that are important but not included in the Christian Bible—numerous religious figures at the time saw the saints who rose from the grave with Christ. Reportedly these saints remained on earth for 40 days after Christ’s resurrection. For example take this text from the Gospel of Nicodemus, Vol 8, Chapter 1:

“When we were coming from Galilee we met at the Jordan a very great multitude of men, fathers who had been some time dead. And they went and walked around all the region of the Jordan and the mountains, and they were coming back without finding them. And, behold, suddenly there appeared coming down from Mount Amalech a very great number, as it were, twelve thousand men, who had risen with the Lord.”

Eostre was a Germanic fertility goddess who had her festival around the spring equinox, March 20. In keeping with a long tradition of co-opting pagan dates and traditions into their celebrations, the church took this as well. This is all according to an 8th century monk named Saint Bede the Venerable. In a text he wrote called “On the Reckoning of Time,” Bede explains that the name Easter was taken from the Teutonic goddess Eostre: “Eostur-month, which is now interpreted as the paschal month, was formerly named after the goddess Eostre, and has given its name to the festival.”

One of Eostre’s symbols of fertility was, understandably, a bunny rabbit, thanks to their prolific reproductive cycles. Thus Christians stole two great things from pagans to enhance the holiday. As for how the Easter Bunny made its way to America, History.com says it can be traced back to the arrival of German immigrants.

While there are certainly pagan traditions that use eggs as symbols of fertility, the Christian tradition of Easter eggs has its roots in Lent. Lent is a preparatory period before Easter where some Christians, particularly Catholics, abstain from certain foods or beloved activities as a form of fasting. In medieval times this fast included meat, milk, and eggs. Of those three foods, eggs are the only ones that don’t spoil quickly without refrigeration. According to Christianity Today, the long Lenten fast often led to a surplus of eggs when Easter rolled around, making them cheaper to buy and give as an Easter gift.

5) Eating lamb on Easter is a holdover from Passover

Serving lamb is a traditional aspect of the Jewish Passover Seder that has become a part of the Easter tradition for many Christian families, but few people know exactly why Christians picked it up. References to Christ being the Lamb of God are common, but the meaning of that becomes more interesting when you look at the scriptures. Jesus’ death shares aspects with the way sacrificial Passover lambs are slaughtered. A traditional Passover lamb cannot have its bones broken dating back to the decrees given to Moses by God. Like the Passover lamb, Christ was crucified without any of his bones being broken, unlike the other two men he was executed alongside. In John 19: 31-34 the Bible says that when the soldiers came to break Jesus’ legs to speed along his death, they found he had already died. Instead, they pierced his side with a spear.

The annual Easter Egg Roll got its start sometime between 1867 and 1872 (accounts vary), but two things are certain: First, it was initially held on the grounds of the Capitol and, secondly, it is now illegal to do so. The tradition apparently annoyed Rep. William Steele Holman of Indiana, the chairman of the Committee on Public Buildings and Grounds. In 1876 Holman passed the “Turf Act” which made it illegal to use any portion of the Capitol grounds or terraces as playgrounds or otherwise, all in the name of protecting the grass. The law has been enforced since 1877, when rain pushed rollers indoors anyway. By 1878, President Rutherford B. Hayes found a workaround.

Marshmallow Peeps are a beloved part of any Easter basket, but these silly treats used to be far more time intensive. In a 2016 interview with USA Today Matt Pye, the vice president of corporate affairs for Peeps maker Just Born, explained a batch of Peeps used to take nearly 30 hours to make. Just Born encountered Peeps for the first time in 1953 when it acquired Rodda Candy Company. While touring the factory representatives of Just Born came across a group of women with pastry tubes making marshmallow Peeps by hand. Due to the long cooling process, Peeps took around 27 hours to make. By 1954 Just Born had automated the process, getting the time it takes to make a batch down to just six minutes.

8) Chocolate bunnies are hollow so you don’t hurt yourself

As a child you may remember the sense of betrayal that came from biting into your first chocolate bunny, only to discover it was hollow, robbing you of precious chocolate. There are two reasons for this. The first is of course money, but not in the way you think. While the expectation would be that hollow bunnies are popular because they save the manufacturer precious costs by not being solid chocolate, it’s actually the other way around. R.M. Palmer’s vice-president of operations, Mark Schlott, told the Smithsonian as much during a 2010 interview. “Hollow has a greater perceived value. It creates a much greater chocolate footprint than solid.”

However, there’s the second aspect to consider: safety. In the same interview, Schlott points out the danger of a giant solid block of chocolate bunny. “If you had a larger-size bunny and it was solid chocolate, it would be a like a brick; you’d be breaking teeth.” That’s why you’ll find small solid chocolate bunnies everywhere on Easter, but the big ones are either hollow or come with a warning that they’re solid.

In the story of Jesus’ final days, Christ told his disciple Peter “before the rooster crows today, you will deny three times that you know me.” Later that evening Peter is recognized as one of Christ’s disciples, only to claim he never knew the man. Just then he hears the rooster crow, hanging his head in shame.

There’s just one problem with this story: Chickens and roosters were not allowed to be raised in Jerusalem at the time. According to the Mishnah, the earliest compilation of rabbinic oral law, roosters and chickens were forbidden from being raised due to concerns about keeping the temple pure. So what’s the real story? It comes down to translation. In some original translations the word was not rooster crows, but cockcrow. Since chickens could not be raised in Jerusalem, cockcrow in this context most likely relates to the man blowing a trumpet to let priests know it was time to start preparations for the day. Because the phrase was commonly used back then, people knew what the scripture meant. As translations moved through history, this meaning was briefly lost, leading us to believe Peter heard the crowing of a rooster.

PAAS has been supplying the world with Easter dyes for over 135 years, but do you know where that name comes from? You might think it has something to do with the Easter bunny, but there’s a much simpler answer. PAAS takes its name from the Dutch word for Easter, Passen, which founder William Townley learned from his Pennsylvania Dutch neighbors. Today PAAS sells around 10 million egg coloring kits every year.

This will come as no surprise to the lapsed faithful reading this article, but Easter Sunday is a boon for church attendance. Part of the big three holidays, alongside Thanksgiving and Christmas, Easter sees many congregations nearly double their attendance. As the son of a Baptist minister, this author can attest to the improved population in church pews come Easter Sunday, but there’s scientific proof as well. A Pew Research study of between 2004 and 2013 saw a dramatic spike among Americans for “Church” around Easter and Christmas. As you can see on the updated Google Trends graph below, searches for “Church” still spike twice a year; at Christmas and Easter.

12) The largest chocolate bunny ever made weighed over 9,000 pounds

Definitely don’t try to bite into this one. Standing 14.8 feet high and weighing in at 9,359.7 pounds, this monstrosity of cocoa was made by Equipe da Casa do Chocolate at Shopping Uberaba, in Uberaba, Minas Gerais, Brazil, in February 2017. It took a team of nine professional chocolatiers working eight days straight to build the bunny. As a reward, they received a Guinness World Record, and hopefully lots of delicious scraps to eat.

13) Sean Spicer was once the Easter Bunny

The current press secretary for President Donald Trump had a very different gig at the White House during the George W. Bush administration: Easter Bunny. The bunny has been a traditional part of the White House Easter Egg Roll since the Nixon years, and Spicer apparently considers his time in the suit a point of pride, listing it on his GOP biography.