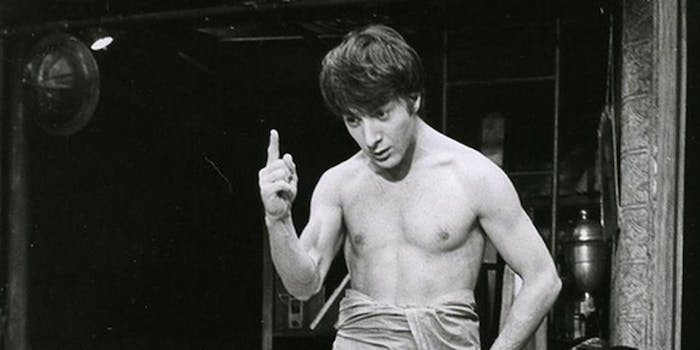 @BballHoffman was an account dedicated to combining actor Dustin Hoffman’s success on the silver screen with the 76-year-old’s presupposed passion for Hoosier-style hoops.

It is with heavy hearts and an insistence on sound fundamentals that the Daily Dot says goodbye to one of the greatest parody Twitter accounts of all time. Last night around 6:45pm ET, @BballHoffman, an account dedicated to combining actor Dustin Hoffman’s success on the silver screen with the 76-year-old’s presupposed passion for Hoosier-style hoops, announced that he would be axing himself and summarily removing himself from Twitter forever.

No doubt he went out in a wild blaze of glory.

@BballHoffman first entered into our hearts and Hollywood hardcourts in February 2012 when he announced quite modestly that he’d “had a good day of basketball today” and “worked on my three pointer.” From there, it was an emphasis on eight assists at the Y, a step-back jumper to win some one-on-one, and a verification of the rules that everybody just had to know. It wasn’t until Feb. 23 that the account began to spit knowledge on the similarities between acting and the sport he so loved.

The account seemed to settle into a groove after that, often referencing some component of acting—or basketball—while making mention of the other interest at the end of each tweet.

When my shot is on, it’s just on. I played a sort of retarded character in Rain Man.

Toaster won’t turn on no matter how much I fidget with the cord that plugs it in. I give up. I am an actor and the Heat-Pacers game is on.

@BballHoffman started to gain serious popularity toward the beginning of 2013, eventually accumulating more than 10,000 followers, but a misunderstanding of parody standards between the account holder and Twitter’s governing figures forced an eight-day suspension in June.

@BballHoffman came back on June 10, thanking his fans for his support and insinuating that he “had to make a few changes, but that’s part of life, acting and basketball.

“Sometimes you can tweak a few lines to improve a script, or change a normal out-of-bounds play to make it more effective,” he added.

Wednesday night, @BballHoffman went out in a wild blaze of glory, announcing he was “going to end it all” at 6:45pm before reminding everybody he still loved basketball and once played a woman in Tootsie.

He also “was a huge retard in Rain Man with Tom Cruise.”

“I hope my legacy lives on—both on screen and on the court,” he wrote. “Because life is about two things: acting and basketball.

“I’m standing in my driveway,” he added. “I am going to recite a line from Outbreak, take a free throw, then run as fast as I can into my garage door. I am going to dribble the ball twice with my right hand, spin it, dribble it two more times, and then going to shoot a free throw. Nothing but net…”

I am now standing in my gray cotton Russell Athletic shorts, And 1 T-shirt, scrunched down socks, and orthopedic Reeboks.

He was gone shortly after that, death by collision with a garage door.

“Keep hustling, and never back down,” he wrote as he left us.

Goodbye, Dustin Hoffman. You were fantastic in Wag the Dog.