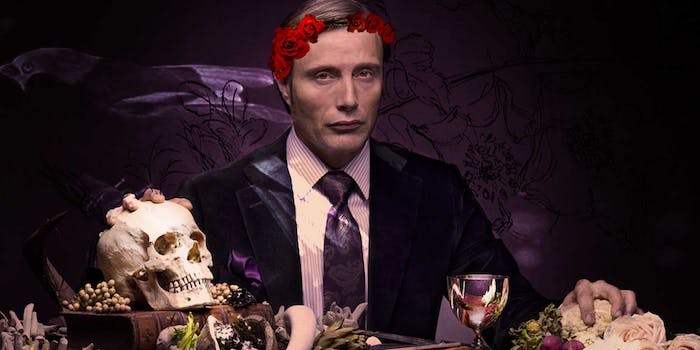 What makes this TV fandom sympathetic to a man who eats human flesh?

Surprisingly, a lot of Hannibal Lecter fandom seems to think he's... well, not such a bad guy.

Stick around in Hannibal fandom, and after a while you’ll discover something very strange: people who think that Hannibal Lecter is, well… not a bad guy.

In the first episode of the show, we see Hannibal kneading air bubbles out of a pair of human lungs. In his kitchen. Because, you know, he’s a murderous cannibal. So why are some fans so happy to interpret him as a misunderstood antihero?

Part of this odd phenomenon is attributable to the way pop culture treats actual misunderstood antiheroes. For a long time, the general assumption has been that dark, morally ambiguous characters are more interesting than clean-cut heroes. Just look at Batman’s evolution from cheerful 1960s crime fighter to the Dark Knight we know today. Or Sherlock Holmes, who has migrated from a misanthropic Victorian intellectual to a self-professed “high-functioning sociopath” in the BBC cult hit, Sherlock. 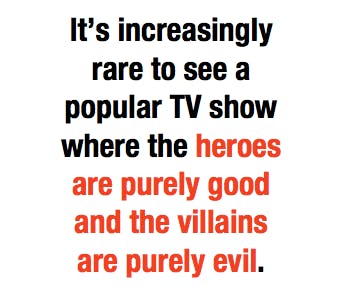 It’s increasingly rare to see a popular TV show where the heroes are purely good and the villains are purely evil. To be honest, it’s comparatively boring. Who wants to watch something about a competent, friendly doctor addressing medical needs when you could be watching Dr. House knock back pain killers and insult his patients? The problem is that after years of exposure to ambiguous, dark yet likeable characters like Dexter and Breaking Bad, it’s hard to change gears—to the realization that some characters really are just evil.

Hannibal Lecter is, actually, that evil of the old school sort. He’s a true monster: a flesh-eater, a vampire, the grim reaper. This isn’t a mystery show about the relationship between a charmingly villainous vigilante and a troubled criminal profiler; it’s a gothic horror story in which Hannibal is the thing that lurks in the shadows, waiting to eat you up.

Yet despite Hannibal’s clear and absolute villainy, viewer reactions have so far been intriguingly mixed, as Hannibal’s online fandom will attest. One viewer, avengerhankvenger, described the situation succinctly:

first 1/2 of hannibal fandom: hannibal’s not a bad guy! he’s just misunderstood! omg!! look how he is around abigail and will he loves them!

other 1/2 of hannibal fandom: my god he’s a master of manipulation just look what he’s done to half the fandom.

Part of the reason this odd, mixed attitude may have emerged could be due to the fact that at first, the format of Hannibal does resemble a crime procedural program. There’s a new murder to be solved each week, and the relationship between Hannibal Lecter and Will Graham is very cat-and-mouse—a popular theme in crime TV. The difference is that in Hannibal, cat-and-mouse isn’t just a theme, it’s an accurate description of events. Predatory Hannibal likes to play with twitchy little Will Graham, his claws sheathed just out of sight until the final episode where he strikes; the mouse Will ends up in a cage while fat cat Hannibal goes free. The cat is definitely the only one having any fun here. 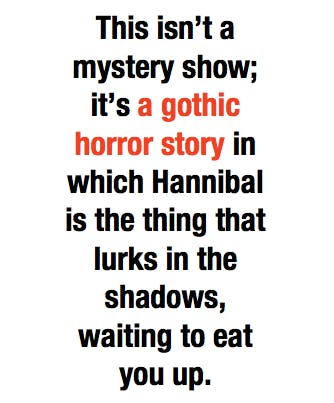 What’s interesting is that fandom’s reaction to Hannibal is oddly similar to the way people react to the character in the show. Even though we literally see him eating human flesh, some fans still can’t quite believe he’s evil—just as in the show, no one seems to pick up on Hannibal’s constant cannibal puns and creepily decorated Dracula house. He’s charming and well dressed and cultured, not to mention being a rich white man who works in law enforcement. Who could possibly suspect him?

It helps that the show is structured in such a way that despite all the cannibalism, it’s several weeks before he actually kills anyone on screen. By that time, we all have Stockholm Syndrome, and just want him to stay out of jail so we can keep watching.

It’s interesting to see just how many people think certain characters “deserve” to be eaten, as if the show’s semi-official motto—“Eat The Rude”—was a moral imperative instead of a flimsy excuse for serial murder.

Self-serving gossip reporter Freddie Lounds (“eat her and make a wig out of her luscious hair”) is fandom’s favorite victim. Since Will Graham’s goal in the show is to catch the Chesapeake Ripper (i.e., Hannibal), it’s hard to criticize Freddie for wanting to dig up some dirt on the country’s most infamous serial killer. Instead, Freddie Lounds’ anti-fandom, like most anti-fandoms, mostly resorts to nonspecific loathing—a complete role-reversal from the reactions to Hannibal himself. With Hannibal, either you love him or you love to hate him; with Freddie Lounds, well… most people just hate her.

Admittedly, she’s pretty easy to hate. Driven, self-centered, and friendless, she manipulates people to further her own ends, not to mention showing everyone up by being a really snappy dresser. Wait, doesn’t that sound familiar…?

Of course, Hannibal is the protagonist, so we’re meant to root for him even when he’s making People Steak by candlelight to a background track of melodramatic French opera. One can’t help feel, though, that Hannibal has a rich and varied history of famous Cool Evil White Guys to back him up—whereas it’s far too easy to dismiss Freddie Lounds as a meddling bitch. Pop culture doesn’t have much to offer when it comes to murderous, charming, female antiheroes. 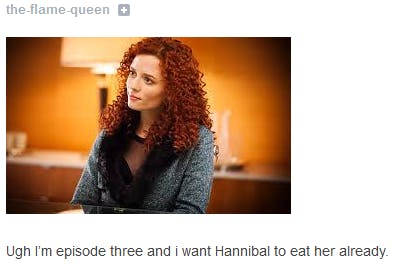 The genius of Hannibal—both the character and the show—is that although we can see him manipulating everyone around him, he’s so mesmerizing we almost want him to succeed. In order for the show to be compelling, we have to be invested in Hannibal’s survival, at least to a certain degree. That doesn’t mean, however, that we should get drawn in so far as to start thinking he’s a sympathetic character.

“I’m wondering if we’ll get to see hannibal cry,” wrote Tumblr user ohwhatagloomyshow in the days leading up to the season finale. Well, we did get to see him cry, in the end. Terrifying, emotionless crocodile tears, produced on cue to provide a simulacrum of emotion when he “discovered” that Will Graham was “guilty” of murdering someone who Hannibal was almost certainly storing in his home refrigerator at that very moment.

Even then, there were doubters. “What about Hannibal’s own tears?” asked one of many fans on Tumblr. “Do you think his crying was genuine?”

The answer, of course, is a resounding “no.” Hannibal is a cannibalistic psychopath, and pretty much every emotion he expresses is entirely false. It’s a testament to Mads Mikkelsen’s acting that so many people are falling for it.

There’s an infamous fandom phenomenon that describes the odd sympathy for Hannibal: “woobiefying.” 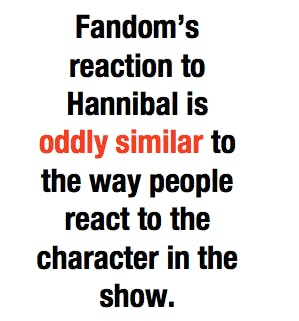 A “woobie” character is one whose story is so tragic and painful that even if they’re a terrible person, you still feel bad for them. Thanks to the current trend for relatable villains, there are a fair few bad guys who fall into the “woobie” category—and fandom loves woobies.

Loki’s role in the Avengers franchise is a perfect example. Combining a tragic daddy-issues backstory and Tom Hiddleston’s emotive face, you end up with a character so deliciously angsty that you can almost forget his maniacal desire to take enslave humankind. Hence “woobiefying”: when fans take the woobie characteristics and run with them, ignoring those darker and less romantic traits.

In the Harry Potter books, Draco Malfoy is a snobbish, racist teenager who joins an evil cult, partially thanks to the influence of his highly unpleasant parents. But in Harry Potter fanfic, Draco Malfoy is regularly written as a conflicted antihero who can be redeemed by the power of love. Ditto Professor Snape, who is regularly paired (romantically, that is) with Harry and Hermione. But the woobiefying of characters like Snape and Loki pales in comparison to the woobiefying of Hannibal Lecter.

While sympathetic villains like Loki have the benefit of a sob story to mellow out their dirty deeds, NBC’s Hannibal is literally characterised as Satan. He needs no reason to do bad things; the most positive emotion he’s likely to express is “respecting you enough not to eat you.”

Hannibal isn’t the Draco Malfoy, or the Snape. He’s the Voldemort of the story. It’s just taken an entire season’s worth of murders for many viewers to realise it.