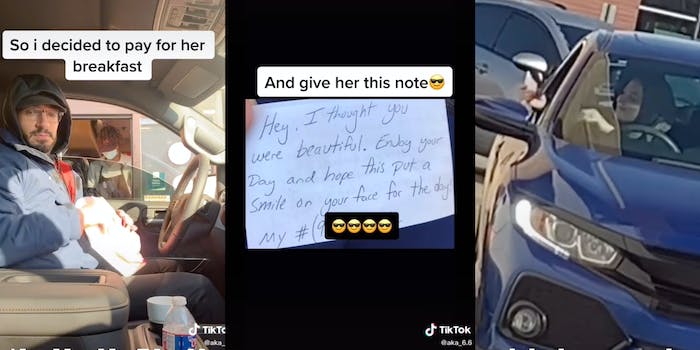 ‘Saw this really cute girl in drive-thru behind me’: TikToker shares video of moment he met wife in Dunkin’ drive-thru line

A TikToker met his wife in a Dunkin’ drive-thru line with the help from an employee.

A TikToker’s Dunkin’ love story is melting hearts across the app.

The video sees Aimen—or @aka_6.6—pulling up to the drive-thru window at a Dunkin’ location. As he offers up payment, he requests that the employee also put the order for the car behind him on his card. The employee obliges and even accepts a simple handwritten note from Aimen to include with the order. The note, which Aimen flashes to the camera before handing it over, is straightforward and sweet. “Hey,” it says. “I thought you were beautiful. Enjoy your day, and I hope this puts a smile on your face for the day!” The bottom of the note includes Aimen’s phone number, which is blacked out for the video.

As Aimen pulls away from the window, he rearranges his phone to watch, through his rear-view mirror, as the woman in a small black car receives her free meal and message. Through the mirror, a woman in a dark hijab can be seen receiving the message, which brings a smile to her face. As she receives the remainder of her order, Aimen compliments the diligent employee. “Eh, employee of the year award right there,” he says.

The video ends there, but Aimen’s love story does not. In fact, his TikTok page is essentially an homage to his romance with the woman in the small black car, whose name turned out to be Kamila.

Following their chance Dunkin’ encounter, Kamila actually texted Aimen. He explained, via comment on his original video, that she fired off a message shortly after the video was filmed. In a part 2, he shared screenshots of the texts along with his thanks to all the viewers who helped his video blow up.

Kamila’s first text starts off strong, thanking Aimen for pre-purchasing her meal and noting that it “did put a smile on my face.”

Aimen’s response notes the scrubs Kamila was wearing when the two met, and, leaning on the “overwhelming times in the medical field,” Aimen calls the gesture a “small token of my appreciation.”

Once the two have introduced themselves, the sparks start to fly. Their conversation becomes gradually more casual as the two exchange ages and tease one another about future meetings at the Dunkin’ location.

Subsequent videos show the couple going on dates, falling in love, and ultimately getting engaged. It also shows their enduring attempts to track down the Dunkin’ employee who started it all, so he can receive their thanks, along with an invite to their wedding.

They never managed to track down the employee, but Aimen and Kamila did end up getting married. Following his re-upload of the clip that started their love story, Aimen also added a video compiling footage from the couple’s big day. The duo looks overjoyed as they dance with their families, cut the cake, and generally melt viewers’ hearts with their unexpected love story.

Numerous viewers, some of whom have been following the story since that first upload hit TikTok, are sharing their delight in the comment section. People were genuinely invested in Aimen and Kamila’s story and found themselves ecstatic to learn that Aimen’s simple Dunkin’ gesture was the first step toward their happily ever after.

A few people are giving recommendations for the next steps. One suggested that Aimen and Kamila—who identify themselves as “the Dunkin’ drive-thru couple” in their TikTok bio—should “name your first kid Dunkin.”

Other commenters, many of whom remembered seeing the original upload in 2020, were delighted to learn that Aimen and Kamila ended up together. They shared their congratulations in the comments, lauding both the couple and the drive-thru employee who made it happen.

Aimen and Kamila are leaning into their origins with a coffee brand, which the couple recently launched, called “Sweet Eye Coffee.”

The Daily Dot reached out to Aimen and Kamila.