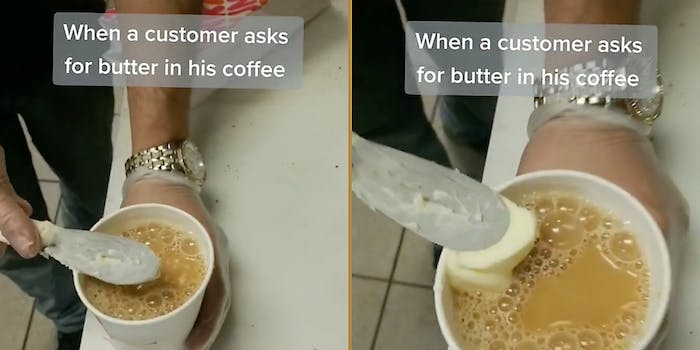 Even the Boston Red Sox chimed in.

A Dunkin’ Donuts costumer asked for butter in their coffee and caused a rift on the internet in a viral TikTok this week.

Dunkin’ Donuts employee @adabadayy’s Nov. 22 video of her putting butter in a customer’s coffee, per request, went viral with over 11.3 million views and 242,400 likes to date.

Captioned, “Y’all are sick,” the five-second video shows @adabadayy scooping butter into a customer’s coffee and letting it melt.

A text overlay reads, “When a customer asks for butter in his coffee.”

Putting butter in coffee is not a new trend; high-profile figures from Joe Rogan to Halle Berry rave about its health benefits. However, the health benefits of butter coffee are likely rooted in high-quality ingredients like grass-fed butter and clean roasted coffee.

While it is unclear what she is putting in the coffee, Dunkin’ Donuts has had disputes over using margarine instead of butter in the past, according to the New York Times.

The video sparked a rift in the comment section, with some commenters noting that butter in coffee is a common practice.

“Butter is cream that’s been shaken and drained,” said @kalakeene.

Others were not convinced, and commiserated with the Dunkin’ Donuts employee over strange customer requests.

“One time a customer asked for SALT in his coffee,” said @nicollee.da.

“We’ll ask them politely but firmly to leave,” said @superheavysamurai.

Even hometown heroes the Boston Red Sox chimed in. (Dunkin’ is headquartered in Canton, Massachusetts, and was founded in nearby Quincy, Massachusetts.)

“We love Dunkin, but this ain’t right,” the Sox added.

The Daily Dot reached out to @adabadayy and Dunkin’ Donuts for comment.