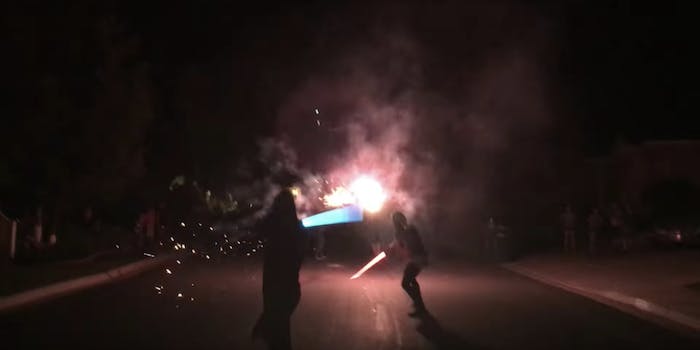 Dudes defend themselves against Roman candles with toy lightsabers

All of the lights.

You know what they say—one man’s stupidity is another man’s chance to laugh at that stupidity.

Two dudes with lightsabers thought they’d go up against one of the most dangerous and dazzling adversaries. Nope, not Darth Vader, but Roman candle fireworks. A couple of friends helped out by launching 360 shots in their direction; meanwhile, the neighborhood Jedi spun and twirled trying to deflect the explosives.

Sounds like a dumb and risky stunt, right? Well, at least it looks pretty damn cool.

Now, would they stand a chance against the Roman candle minigun?

BONUS: I watched every ‘Star Wars’ in one sitting