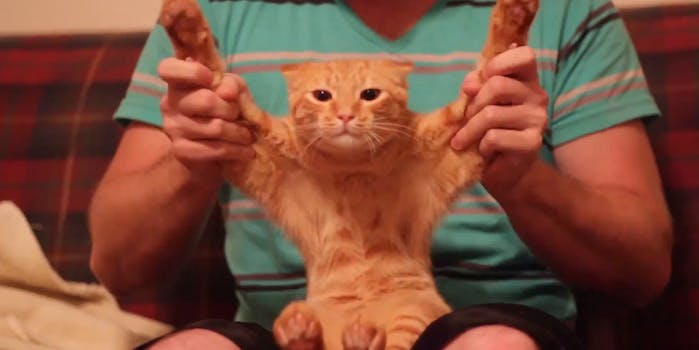 Here’s an obvious fact: The Internet unanimously loves cat videos. The same can’t be said for musical genres, and this division of opinion is behind a current YouTube cat video battle taking place on Reddit.

On Saturday, user chefheff uploaded a clip to r/videos—the social news site’s footage depository, and the clips your friends share on Facebook three days later—that showed a cat owner moving his feline’s front paws along to a Skrillex song.

The YouTube video, aptly titled “Dubstep Cat,” is certainly bizarre. It’s also really hilarious, thanks in large part to how well-synched the cat’s movements are to the song and how uninterested it seems to be.

Since its posting, the clip has amassed over 1,400 karma points on the site and has been viewed close to 1 million times on YouTube.

In true Reddit one-upmanship, it has also inspired a challenger. Just mere hours after, Reddit was introduced to “Heavy Metal Cat.”

Much like his EDM colleague, “Heavy Metal Cat” nails every beat of the song, which is made even more impressive by the fact that he’s borderline morbidly obese.

Unfortunately for the metal head, the Reddit audience hasn’t embraced his drumming chops to the same degree as “Dubstep Cat,” managing to get a paltry 275 karma points. On the bright side, “Heavy Metal Cat” has more than twice the views on YouTube—2.3 million as of this writing—that that’s likely because the video is more than a year old (“Dubstep Cat” was uploaded last Tuesday).

So what did we learn? That cats are still awesome, especially when their owners make them dance/drum for the Internet’s amusement.