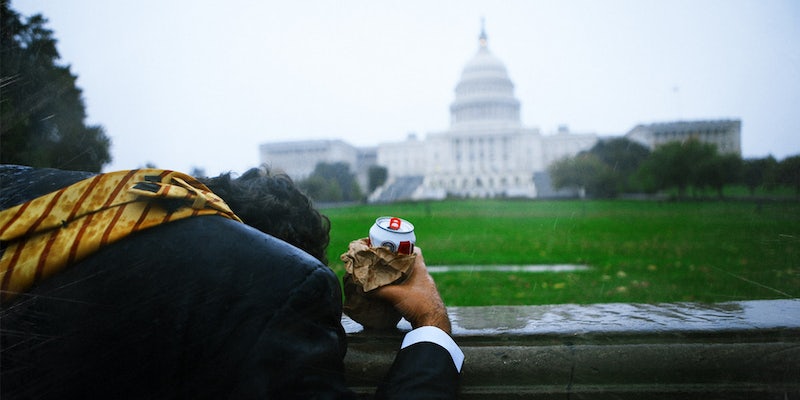 Click this button to drunk dial a random member of Congress

Now's your chance to tell your representatives what you really think of their actions.

Take a shot of liquor and then swipe open your cell phone, because you’re about to drunk dial Congress. Consider it an airing of grievances.

The website Drunk Dial Congress lets you do just what the title implies. Give ‘em a ring and tell them you’re mad about being furloughed, or forced to work without pay, or just embarrassed and disgusted by their behavior.

The site provides you with drink recipes and talking points so you can make your call count. All you have to do is put in your number and the site will connect you to a random member of Congress.

I got Rep. Susan Davis of Cambridge, Mass. the first time I called but I got nervous and hung up on her. The second time, I reached Rep. Frank Wolf of Virginia’s 10th District. The woman who answered the phone at Wolf’s office said they’d been receiving “a fair amount” of calls about the government shutdown but that none of the callers had specifically mentioned they were coming from Drunk Dial Congress.

So you may not get the representative themselves, but someone answering their phone will definitely pick up and hear you out. I was very polite (and sober, unfortunately) and said I was calling from that site and that I wanted to talk about the government shutdown. The woman seemed busy, but answered my questions.

If anything, the experience is cathartic, which, according to the site’s description, is the whole point.

“Note: As Members of Congress quickly returned from their final symbolic, non-effective and otherwise useless votes to avert a government shutdown, the heavy drinking began,” the site reads. “Reports of our representatives getting plastered on the government’s dime – the one we have left – have come streaming in from witnesses all over Capitol Hill. Now’s your chance to tell your Representative what you really think of their actions.”

Grab a beer and give ‘em a call. It might make you feel better.