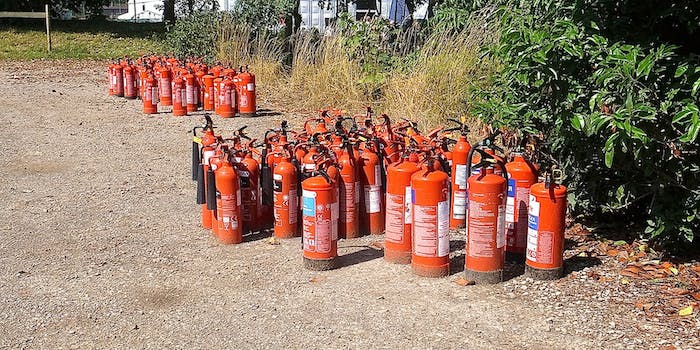 Maybe he just wanted to make it snow.

Some things just shouldn’t be mixed. Alcohol and fire extinguishers, for example.

On May 28, redditor fireball360 uploaded a video to Reddit of some of the leaders of tomorrow carelessly spraying the flame retardant foam of today throughout a dorm building. The obligatory bro guffaws litter the soundtrack, punctuated by the occasional “This is a bad, bad idea” comment.

Then, suddenly, the geniuses learn that fire isn’t the only thing that can set off alarms.

The original video uploaded to Reddit received so much unwanted attention that it was quickly made private. Fortunately, the YouTube channel weknowmemes uploaded a mirror, much to the delight of latecomers and law enforcement officials alike.

Before anybody jumps to conclusions, though: Maybe he just wanted to make it snow.