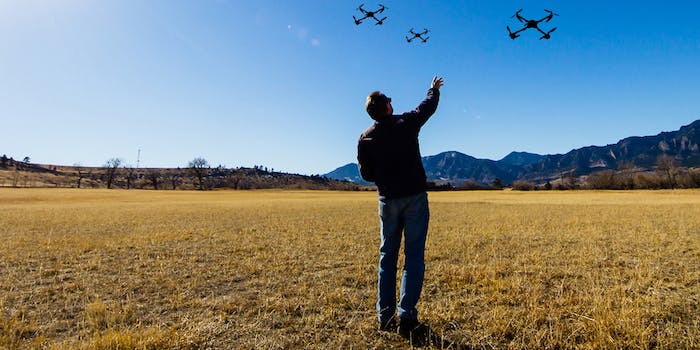 Drones are the future of selfies

For the future of selfies, we need to look skywards.

A dronie is a picture of yourself taken by a drone. You’d think it was that simple, but it isn’t. Here are the steps to take drone selfies: You must hold the drone’s remote control in your hand, point the camera directly at your face at all times, and only then let it go, making it fly further and further away.

Selfies are the past, dronies are the future. Selfies are just too easy to manufacture now, and no one can really fail a selfie. Dronies are a lot harder to master. They require more skill and therefore they are art. Dronie art. Sure, they’re still more pricey than selfies, as cheap drone models can’t take a steady video while moving. The Chinese-made DJI Phantom 2 VISION Quadcopter (with a gimbal) is the most affordable model for dronie shots.

The most epic dronie you could create would involve launching a drone quickly enough for it to leave the atmosphere within a 15-second Instagram video, reducing you to a tiny dot on the landscape. Sadly, the space dronie has yet to be taken.

Simple dronies are becoming increasingly common. Remember: Visiting your local park without taking a dronie is a waste of time, much like going to war without CBS reporter Lara Logan. However, almost none of us has a licence to operate these machines, big or small. Be careful when taking drone selfies in crowded areas, however, as they may alarm onlookers and fellow park-dwellers.

The dronie has become so essential that taking random shots with your drone of scenery and birds might make viewers think it’s not really your own drone, just stock footage. You must be in it to pin it.

Soon enough, dronies will replace those clumsy extending selfie sticks. It’s going to be pretty cool when the rise of the dronies will start making drones collide in midair, as there’ll be so many wandering above Panda Express.

Here’s an example of a dronie done wrong. It has to start like a selfie, with the user touching the device.

Remember, a key difference between selfies and dronies is that dronies are video and selfies are still images. It’s pointless to take a non-video dronie, as the whole point is seeing it fly away (not zoom out).

With drone selfies fast becoming a cultural phenomenon, I decided to look to poetry for inspiration. Here is my variation of Stevie Smith’s poem “Not Waving but Drowning,” which has been remade for the dronie age:

“Not Waving but Droning,” by Nimrod Kamer

Nobody heard him, the dead unmanned,

But still he lay moaning:

I was much further out than you thought

And not waving but droning.

It must have been too cold for him his heart gave way,

Oh, no no no, it was too cold always

(Still the dead one lay moaning)

I was much too far out all my life’s dronies

Not waving but droning.