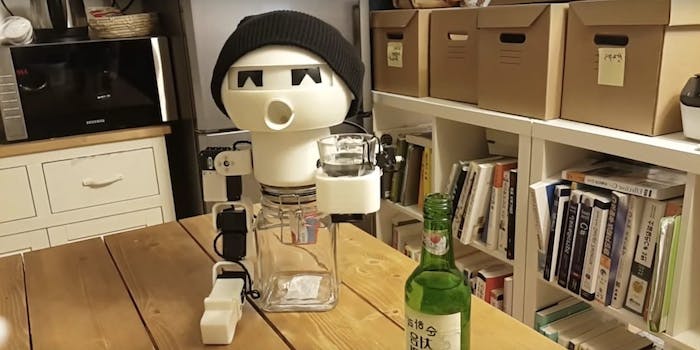 Drinking alone mostly sucks. We’ve all been there before: beer in lonely hand, everyone staring at you with an intense gaze that translates to, “Sheesh, I’m glad I’m not that person.” Thankfully you no longer have to worry about that as a South Korean inventor brought to life a robot that’ll be your designated drinking buddy forever.

Called Robot Drinky, the robot will take shots with you and responds just like a human would after several pops. Its cheeks get rosy after each shot that’s taken, and it’ll even offer to clink glasses with its drinking partner. And the best part? The alcohol falls into a glass jar, meaning you can have Drinky take those shots all over again.

The inventor was inspired to create it after—you guessed it—drinking alone on Christmas Day in 2012.