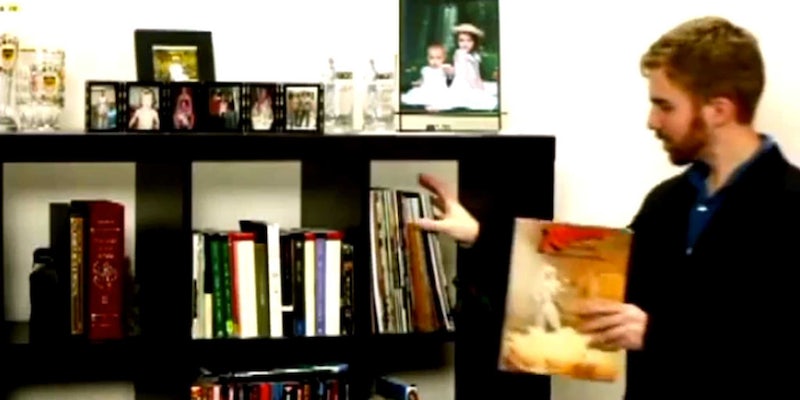 DreamWorks did not appreciate this hilarious video résumé

Employers often encourage applicants to think outside of the box, but one aspiring production assistant's attempt to be creative got him berated instead.

Employers often encourage applicants to think outside of the box, but one aspiring production assistant’s attempt to be creative got him berated instead.

Christopher Woodring, one half of Funny Shorts, applied for a post-production assistant job at DreamWorks Studios, but he hadn’t heard anything back after he sent in his application. Instead of making a followup phone call, he decided to send in a video.

“Now, my résumé’s already floating around your offices and you haven’t called me yet—which at first I was a little worried about,” Woodring explained. “But then I realized my references aren’t on there. So I have here with me a long-time friend and the best reference I could possibly ask for.”

Woodring turns to face his “reference,” who turns out to be none other than Steven Spielberg, cofounder of DreamWorks Studios.

The footage of Spielberg is dark and grainy, so Woodring matched his lighting to make it look like he was interviewing the director in the style of Al Yankovic’s celebrity interviews.

Throughout the “interview,” Spielberg compliments Woodring’s ability (as well as his eyes), struggles to come up his biggest fault, and even suggests that he would cry if Woodring didn’t work for DreamWorks Studios.

Redditors in r/videos doubted the story’s authenticity. A redditor who claimed to work at DreamWorks threw shade at the idea that cjwoodring was banned:

Okay, created this account for this one comment. You do understand employees at DreamWorks Animation are Redditors right? This is not some secret internet club…

This never happened. He most likely didn’t get the job because they weren’t hiring or they hired one of their interns to fill that entry level role. Usually PAs are previous DWA interns. When they’re not past interns, usually another DWA employee recommended someone they went to school with for the job instead. I’ve helped build and maintain the system recruiting uses over in Riverside and they do not Blacklist anyone. Its against company policy and probably illegal in CA for all I know.

Theres a number of factors that could have contributed to him not getting the job, my guess is lack of positions open. Usually when one opens up on the website, we get 100s of applications in the first couple hours.

I apologize if I come off defensive, I really do like working at DreamWorks and it hurts to see this community accusing it of something as low as blacklisting someone for a joke. It’s ranked #12 best place to work in the world, competition is fierce.

As for your friend being banned from DWA… OP or his friend are exaggerating. People here have a good sense of humor. I know the recruiting dept personally and they would have thought this to be hilarious.

Woodring came to further explain his side of the story. He couldn’t prove that the story actually happened, but he offered some insight to the situation. He only got “a slap on the wrist” over the phone for the video, but he found out from his college that he’d never be able to get a job at DreamWorks Studios. He said he doesn’t harbor any hard feelings towards the company.

Hey there, I’m the friend in question (and the other half of Funny Shorts, for those that didn’t make the connection). A couple things:

1) It wasn’t DWA, it was DreamWorks Studios, on the live-action side of things.

2) I was only given a slap on the wrist over the phone. It was my college that received a phone call saying I’d never get a job there after that.

3) All the people I met at Dreamworks were, and still are, AWESOME! And I mean that sincerely. I hold no hard feelings whatsoever for the reaction to the video. It was an entirely valid response.I mean, I put their CEO AND ONE OF THE MOST RESPECTED DIRECTORS IN THE WORLD in it, without permission, as if we were BFFs. That deserves an extreme reaction, one way or the other. I was sort of hoping for the other, but still, totally valid.

4) I’m not sure that I can prove that this happened, really. Hopefully people can just enjoy the video regardless? It has the Jurrasic Park theme in it, guys. How can we listen to that and not all get along?

Next time, a phone call may be all you need.