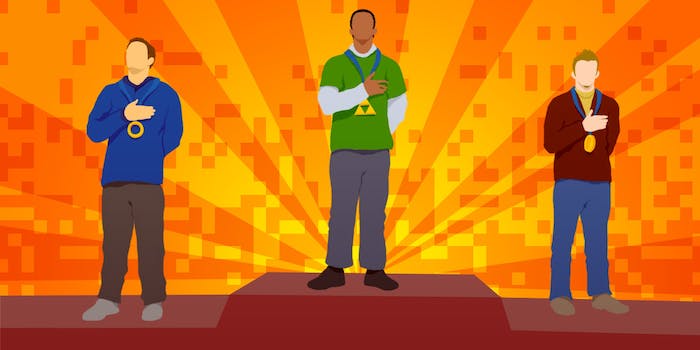 Why eSports are the Olympics of the Internet age

Though it may not be a financial powerhouse yet, eSports are only going to grow in relevance.

When do you know you’ve “arrived?”

When the U.S. government recognizes you?

When the South Korean government declares you a danger to the nation’s youth?

When Coca-Cola sponsors you?

When there’s actually an indie scene to keep it real?

When the Daily Dot starts covering you?

Each of those milestones has recently been passed by eSports, and so we declare it to be coming into its own.

The journey of eSports, from fringe pastime to (maybe someday) mainstream, mirrors, and is part and parcel of, the rise of the Internet itself.

For those of us who live much of our lives online—and from the newsroom at the Daily Dot (itself a “virtual” environment)—it often seems like “real” life is the sideshow, that what happens offline is the fringe hobby.

And as our lives go, so do our games.

Games are, after all, practice for real life. Chess evolved to teach young military officers strategy. The original Olympic sports—things like running and discus throwing—were decisive battlefield skills. And you don’t get any more “real” than war.

Today, of course, war doesn’t involve a whole lot of javelins. Or, honestly, a whole lot of running. In war today, you’re likely either to be in special ops (they do the running and jumping) or sitting at a console in Denver from which you’re operating a drone.

So, OK, football isn’t going away anytime soon. Partly because those special ops guys need something to do in high school and partly because Tom Brady probably looks better naked than Jayson Love (no offense, Jayson).

Either because the Internet itself is becoming real life or because the skills of “real” life are becoming more Internet-y, the truth is that online games like League of Legends and Starcraft are honing skills that are increasingly relevant and valuable to life, due to the changing nature of things like war. In other words, though it may not be a financial powerhouse yet, eSports are only going to grow in relevance.

And that growing relevance, in turn, will change many of the seemingly most immutable of life experiences. What will happen to the high school years, for example, when there are eSports stars who are just as big as the biggest athletes, showered with money, fame, and sex? Will there be a “gaming jocks” clique? To whom will they give wedgies and swirlies? Hollywood will be forced to come up with a whole new teensploitation paradigm…

Actually, wait a sec, that’s not a bad idea, I need to call my agent, excuse me.

Aaaaaand, I’m back. He says it’s going to be another couple years before the studios notice. Oh, well.

But notice they will, because eSports is the future. Welcome to it.