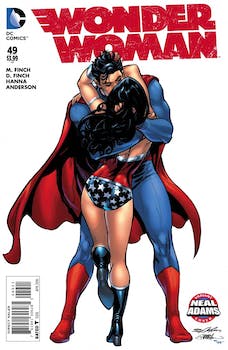 Don’t exploit Wonder Woman on her own cover

Why is Wonder Woman taking a backseat in her own story?

In what writer Dan Greenfield named “the sexiest cover Neal Adams has ever drawn” worthy of a “super-cold shower,” we see Superman enveloping Wonder Woman in a passionate embrace. This isn’t surprising, they’ve been in a relationship ever since the Justice League reveal in 2012. What is surprising is it’s a Wonder Woman cover, but we don’t see her face. For all intents and purposes, she’s a faceless butt with legs. Wonder Woman is taking a figurative backseat to someone else in her own story.

This recent cover is one in a series of comic book covers where normally powerful female characters are exploited for the purpose of enticing readers. Marvel was criticized for a variant cover of Spider-Woman that showed her seductively bent over. DC Comics cancelled a Batgirl variant cover for prominently featuring The Joker during the time he tortured, and possibly sexually assaulted, her. Wonder Woman has, for the most part, not been subject to this, but there have been times she’s been exploited. For example, the unaired 2011 Wonder Woman TV pilot had Wonder Woman using her sexuality to get her way, often breaking the law in the process.

It’s especially disheartening as we’ve seen better representation of women and sexuality in comic books over the past couple of years. For example, Saga’s first comic featured Alana breastfeeding Hazel—even if The Big Bang Theory misunderstood it to mean “sexy boobs.”

It’s especially disheartening as we’ve seen better representation of women and sexuality in comic books over the past couple of years.

Wonder Woman’s variant cover is based on Superman #243 from August 1971, in which Superman is entangled with “The Starry-Eyed Siren of Space,” a hyper-intelligent being who mentally compelled Superman for make-outs and disappears after the final pages. But that’s only something you know if you read the book. On the cover, she’s literally a nameless mystery woman who’s designed to tempt readers with her curves.

That’s not a problem in itself. After all, it was Superman’s story and it was over 40 years ago. But this is 2016 and Wonder Woman is not a nameless mystery woman, so why is she being treated like one? She’s been reduced from an equal partner in their relationship, and the center of her own comic book, to another faceless romantic entanglement who could very well disappear after one issue. There’s no twist here, no unique angle that separates this romantic embrace from the one with the Mystery Woman. Adams himself acknowledged that there’s no difference between the original cover image and the new one. Well, apart from one thing.

It’s not like Adams is adverse to changing dimensions on his characters. He swapped out Superman for Starfire on one variant cover and changed a dour shadowy Batman into a menacing larger-than-life Joker. This even includes Wonder Woman herself. In the variant cover for Superman/Wonder Woman #26, Adams said in an interview that he had to unnaturally change Wonder Woman’s physical dimensions to make the situation on the cover, an homage to World’s Finest #180, more plausible.

“I had to draw a Wonder Woman who looked like she could hold Superman. So I did,” Adams told 13th Dimension.

Variant covers are not always realistic, serious or even canon. They’re art, giving us a chance to see and experience these characters in new and different ways. They can be thought-provoking, shocking or sexually provocative, but they still have to serve the story and its characters.

If he’s willing to change Wonder Woman’s dimensions to serve a cover where she’s about to kill Superman, why not change the one where she’s romantically linked to him? Reverse their positions so Wonder Woman is holding Superman in the same passionate embrace. She could stand on a box, or she could fly. You could even make her bigger than Superman. It’s a variant cover, so it doesn’t fully matter if it’s realistically sized or not.

Another option would be to simply use the cover for a Superman story instead of Wonder Woman’s. After all, Superman is the character with agency. He’s bigger, he’s dominating the embrace and you can see his face. Adams has a decades-long legacy of comic book covers he could’ve drawn from instead for an alternate Wonder Woman cover. Heck, Adams could’ve swapped the cover inspiration he used for Superman #49’s variant cover with Wonder Woman’s, putting Wonder Woman in the shoes of Batman instead.

Variant covers are not always realistic, serious or even canon. They’re art, giving us a chance to see and experience these characters in new and different ways. They can be thought-provoking, shocking or sexually provocative, but they still have to serve the story and its characters. Adams made his titular character a faceless sexual object, and that fails her story. Wonder Woman is a literal Amazon, a strong, powerful character and a feminist icon. She’s not a mystery woman for Superman to embrace.