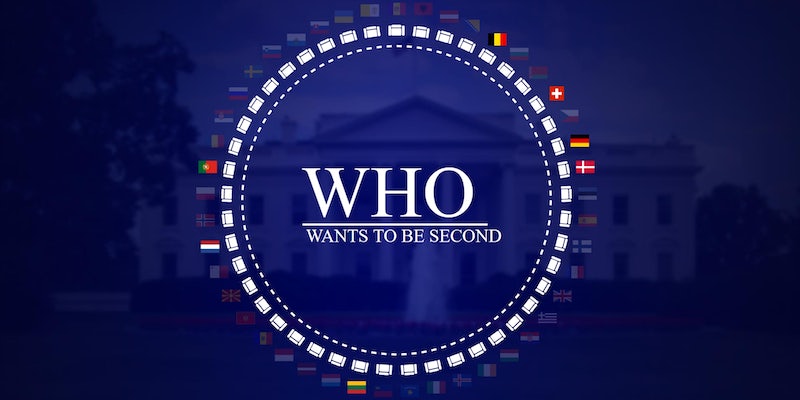 Europe’s late-night hosts mock ‘America First’ policy with attempts to be No. 2

Who wants to be second?

Last week, a Dutch TV show “introduced” Donald Trump to the Netherlands in a satirical video using his own words in an attempt to make the Netherlands second after “America First.” Now, multiple other countries are vying for the title in what looks to be a competition of comedic proportions.

The Swiss show Deville Late-Night responded Thursday with a video of its own highlighting how safe it is, how it loves Russia so much it made a town just for them, and how the Swiss flag may have inspired another flag in America. Switzerland also wins Eurovision every year, so Trump can definitely relate to how successful it is.

But while the Switzerland video has gotten much attention since it launched as a response to the Netherlands video, it’s not the only one. Linked by the hashtag #EverySecondCounts, other countries’ late-night talk shows are joining in on the fun, each of them with their own Trump-esque voice to tell Trump just why he should choose their country as his most-trusted ally.

Between the original Netherlands video and the responses, seven countries to date have participated in making “second” videos for Trump to date with more promised on the way according to the individual or group behind Every Second Counts. The site’s design invokes the European Union flag, with seats highlighted for countries who have their own “second” introductory video. Who wants to be second?

Do you also got a funny TV show in a great country that wants to be second?

And while the “contest” might have just begun, there’s some fierce competition among contenders as they try to stroke Trump’s ego while simultaneously taking him down a few pegs.

The Belgian show De Ideale Wereld, which has balls, is not as small as people say, and has a pissing boy statue as a mascot. It’s also using alternate facts like how the Swedish group ABBA is actually Belgian.

Portugal’s 5 Meia Noite played along too, focusing on the plights of Portugal’s first king and how Portugal is tremendously successful at the real football—or as Americans know it, soccer.

Germany’s Neo Magazin Royale shows that Germany once had a wall, which made people cry after it was torn down, as part of its historical showcase. It has the best politicians and lists Hitler as someone who made Germany great again. (It also claims that Steve Bannon is a fan.)

The Danish program Natholdet had plenty to brag about, including the (not so) Little Mermaid and an idea of getting the Bald Eagle and the Mute Swan together to “make beautiful sweagle babies.”

And Lithuanian show Laisvės TV brags about famous Lithuanians Jason Sudeikis and Hannibal Lecter while alluding to an important distinction: It’s the center of Europe.