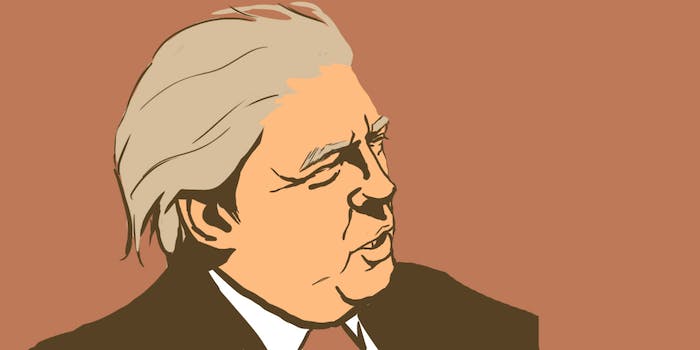 What Donald Trump’s ‘war on Christmas’ is really about

‘Tis the season to be outraged.

Last week, Internet evangelist Joshua Feuerstein fired the opening shots in this year’s “war on Christmas” when he posted a video lambasting Starbucks for failing to feature any images on their seasonal cups. “Do you realize that Starbucks wanted to take Christ and Christmas off of their brand new cups?” he indignantly asked. On Monday, Feuerstein gained an ally in Donald Trump, who suggested Christians boycott Starbucks. “If I become president, we’re all going to be saying Merry Christmas again,” Trump said. The reaction on social media wasn’t kind, with several people tweeting #ChristianitySoFragile to mock the controversy:

If #RedCups threaten your religious faith, your faith wasn't very strong to begin with. #ChristianitySoFragile

It is our responsibility as Christians to forgive. To hate because we have been hated is everything Christ never did! #ChristianitySoFragile

#ChristianitySoFragile is a play on the #MasculinitySoFragile hashtag, which trended earlier this year. While there are some important differences between the two, both are highlighting similar issues of structural power. “When you challenge masculinity, it hits a nerve,” Anthony Williams, the creator of #MasuclinitySoFragile, told the L.A. Times in September. “It makes some men nervous,” he said, because it challenges notions of male ownership of female bodies and the assumption that men are superior to women’s. Similarly, the annual #WarOnChristmas conservatives claim to fight is not, as they say, about keeping “Christ in Christmas” but asserting dominance over American culture.

#MasculinitySoFragile was useful because it served to illustrate just how society defines manhood at the expense of marginalized groups, particularly women. The women and men using the hashtag were quick to point out how masculinity can be threatened by the most trivial of things, such as a woman turning down romantic advances or a boy playing with a Barbie. What should be innocuous, everyday occurrences (an adult getting told “no,” a child playing with a toy) are seen as threats to the very foundations of society.

Shortly after the hashtag took off, people began using it to highlight needlessly gendered products, ranging from sunscreen to loofahs, ridiculing the notion that someone’s manhood might be compromised if he didn’t use a “manly” cotton swab.

Sound familiar? The uproar Feuerstein has created over the Starbucks cup reveals just how fragile some Christians’ faith can be. Writing as a Christian myself, if your celebration of the nativity is somehow compromised by a plain coffee cup, you should probably be in a church, not a coffeehouse. It’s a point The View’s Candace Cameron Bure, herself an evangelical Christian, summed up in an Instagram post. “A Santa, a snowflake, some holly, a polar bear, some jingle bells or plain red cup don’t define Christmas for me as a Christian. My relationship with Jesus does.”

Starbucks War on Christmas? It's a red cup, folks. Until Starbucks puts a baby Jesus or nativity scene on the cup while saying Merry Christmas, then pulls it because they say it’s offensive, let’s talk. I don't remember Starbucks ever being a Christian company, do you? A Santa, a snowflake, some holly, a polar bear, some jingle bells or plain red cup don’t define Christmas for me as a Christian. My relationship with Jesus does. So, I will joyfully sip on my Starbucks coffee, in a plain red cup, and instead of complaining about the lack of decorations, I will lovingly share the good news of Jesus Christ with friends and co-workers or anyone who's willing to engage in conversation. Merry Christmas to all!

Like Cameron Bure, I don’t define my Christianity through the secular trappings of the season. Though festive coffee cups and decorated trees are nice, my faith isn’t shaken by the lack of them anymore than, say, my masculinity is shaken by a scented candle or regular-sized Kleenex. I don’t define either my relationship with God or my relationship with myself through things.

So why are people like Feuerstein and Trump so adamant about keeping snowflakes on a coffee cup? The answer lies in the origin of the modern “war on Christmas” myth. Bill O’Reilly began featuring a segment called “Christmas Under Siege” on his nightly Fox News program as far back as 2004. In that segment, he laid out what he perceived as an attack on Christianity by what he dubbed “secular progressives” hell bent on erasing religion from American culture:

Secular progressives realize that America as it is now will never approve of gay marriage, partial birth abortion, euthanasia, legalized drugs, income redistribution through taxation and many other progressive visions because of religious opposition. But if the secularists can destroy religion in the public arena, the brave new progressive world is a possibility.

That year was a nexus in the gay rights battleground. 2004 saw George W. Bush re-elected on a wave of evangelical votes stemming from his support for a federal constitutional amendment banning gay marriage, and O’Reilly’s “Christmas Under Siege” segment was an attempt to bottle that lightning. He weaponized Christmas to fabricate an assault on Christian identity.

This is a dagger Josh Feuerstein now wields. In a rambling diatribe following the Supreme Court’s decision legalizing same-sex marriage, he blasted President Obama, contending that he couldn’t possibly be a Christian because “how is it that a Christian could support gay marriage?” Feuerstein called the court’s decision the “beginning of the Christian holocaust.”

Their Christian identity reacts with the same vitriol as masculinity does when they are threatened. Feuerstein questioning Obama’s faith because of his support for equal marriage is basically the “no homo” of #ChristianitySoFragile. The same way that straight men will react uncomfortably, even violently, to demonstrations of affection between men or any insinuation that they themselves might be gay, Christians like O’Reilly and Feuerstein wrap their own faith in a blanket of homophobia. If they cannot restrict the rights of gay people, they themselves feel as though they are under assault.

literally nothing is more fragile than masculinity pic.twitter.com/0EL2cTkqGA

Didn't all you #merrychristmasstarbucks idiots already boycott because of their stance on gay marriage? Or do you have to re-up every year?

Bakers free not to bake for gay couples, but Starbucks not free to design their own cups. #facepalm #MerryChristmasStarbucks

A religion that boasts billions of followers around the world is not so fragile that its social influence could be eliminated by gays, just as patriarchy is sure to withstand a hashtag. Donald Trump and Joshua Feuerstein have nothing to fear: No matter what color Americans’ cups are or what toys our children play with, we’re all going to be OK.