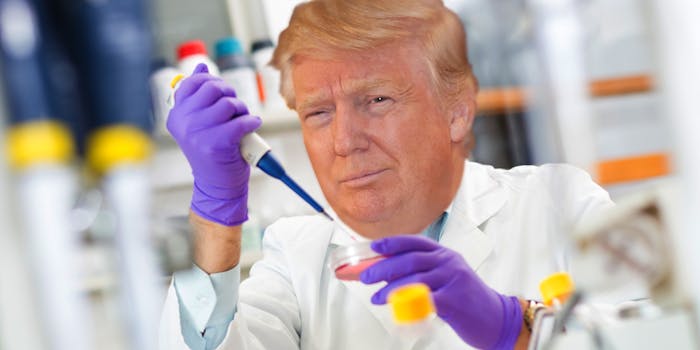 Unconfirmed hypotheses are for losers.

Across the labs and research facilities of America’s heartland, a massive uprising of disgruntled scientists and doctoral candidates is growing. Donald Trump, Ph.D. is their choice for president.

He campaigns on the promise to “make science great again.” But could Trump Ph.D. break up America’s scientific community… for good? 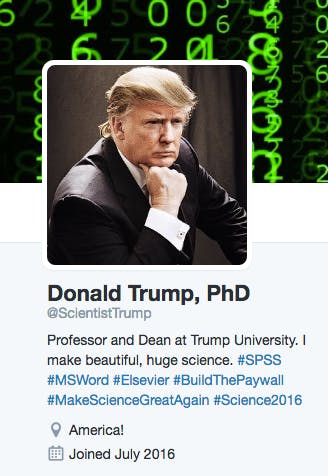 The @ScientistTrump parody Twitter account has existed for less than a week. In that short time, he has widened deep-seated rifts between the hard science and social science communities. He has alienated astrophysicists and Python programmers. He has poked fun at venerable institutions such as the American Geophysical Union, the National Science Foundation—and even Neil DeGrasse Tyson.

Yet Trump Ph.D.’s unconventional methods seem to be working. Scientists are flocking to his movement in droves, drawn to his tough stance on open-access journals and unabashed embrace of the programming language SPSS.

Do you believe Bayesian ecologists are ruining America? Do you want to build a big paywall over all the nation’s scientific journals so people stop reading your research for free on Google Scholar and SciDirect? Are you an SPSS statistician sick of all the good jobs going to those who are proficient in R?

If the answer to any of these questions is yes (or 1, which means true for all you non-SQL nerds out there), it’s likely Trump Ph.D.’s presidential platform will resonate with your left-brained self.

I'm going to be the greatest science President that God ever created. I'll bring real experiments back to America! https://t.co/nRBLSv7F99

America is proud to stand shoulder-to-shoulder w/a free & ind Jupiter. We stand together as friends, as allies. https://t.co/FXMqFKlZdL

Dishonest reviewers are trying their absolute best to depict a statistic in a tweet as the bayesian prior rather than a GLM, or plain ANOVA!

I have a great relationship with The Humanities. #MakeScienceGreatAgain

We must suspend immigration from regions linked with comprehensive parental leave until a proven vetting method is in place. #Science2016

Among Trump Ph.D.’s more controversial viewpoints, meanwhile, are those he harbors against marginalized groups within the scientific community. He’s no fan of social scientists and accuses them of “losing the country.” While no actual polls have been conducted, it’s fair to say that Trump Ph.D. would rate poorly among practitioners of anthropology, psychology, and other so-called “soft” sciences.

Especially since the people analyzing the polls are social scientists themselves.

The social scientists are losing people. I’m very, very proud of the millions & millions that have come to STEM. https://t.co/fU2h1pvgIj

Oh, no, I have now been pegged into one of @ScientistTrump's categories of losers. https://t.co/qjoPNxMr95

However, there are still some outliers.

And despite this purported hatred of the non-STEM sciences, Trump PhD insists he “loves psychology” and credits it for his wealth.

Trump Ph.D.’s preference for SPSS is so vehement that he has publicly supported a ban on Python programmers.

.@cnchapman The real danger is #Python users. They are terrible programmers! Some are nice people, but we have to be careful. #BuildTheWall

Which led programmers to call out the fictional construct for his condemnation of other coding languages.

Trump Ph.D. has since backed away from his initial promise of a full ban of R package.

Not all #Rstats packages, just the ones posted to CRAN from countries with terrible programmers. Must be vigilant! https://t.co/z8fD5PBLBw

But he has has nonetheless taken to trolling Hadley Wickham, the New Zealand statistician and creator of the R programming language.

Thank you to the #SPSS community! I will fight for you while @hadleywickham brings in more people that will threaten your freedoms & beliefs

Despite criticism from the Trump Ph.D. camp, the creator of R is pretty non-plussed.

“I think it’s quite funny,” wrote Wickham in an email to the Daily Dot.

Trump Ph.D.’s relentless hatred for vulnerable fields of research knows no bounds. He has criticized paleontologists, astrophysicists, and even NASA and the entire field of astronomy, despite congratulating the Juno space probe in a subsequent tweet.

.@sdoownek Astrophysics is a mess. Obama is weak on NASA, only proposing to cut Interplanetary Science Division. No vision – must cut more!

America is proud to stand shoulder-to-shoulder w/a free & ind Jupiter. We stand together as friends, as allies. https://t.co/FXMqFKlZdL

If you ask Trump Ph.D., paleontology is a dying field for fake scientists who want to dig up old dinosaur bones and live out Jurassic Park IRL:

Paleontologists, whose field is dead, are making false statements about me in order to salvage hope! Sad. https://t.co/EP5dWPCpTw

Astrophysicists and astronomers? Just a bunch of hippie stargazers.

Hawking has been wrong for 2yrs-an embarrassed loser, but if astronomers can't control their own, then not a field. https://t.co/CcJlYpWK43

Trump Ph.D. has also accused famed astrophysicist Neil deGrasse Tyson of holding a fake diploma and physicist Stephen Hawking of being an “embarrassed loser.” Trump Ph.D. claimed an “extremely credible source” had tipped him off about Tyson’s fake credentials.

An 'extremely credible source' has called my office and told me that @neiltyson's diploma is a fraud. #MakeScienceGreatAgain

Neither Hawking or Tyson responded to The Daily Dot’s requests for comment. But we did get in contact with the scientist behind @ScientistTrump. Turns out Donald Trump Ph.D. is the work of Professor Emilio M. Bruna, who heads Bruna Lab at the University of Florida.

We asked the mastermind behind @ScientistTrump a few questions:

What inspired you to create @ScientistTrump?

Honestly, it started as a joke. Some colleagues and I were joking on Twitter about what Donald Trump would be like as the editor of our manuscripts submitted to scientific journals. I created the account in five minutes, sent a few tweets, and it blew up (well, by academic standards).

Why is the idea of a scientist alter-ego for Donald Trump so funny to people?

It’s actually humor mixed with fear! But I think the idea of someone who is so sure of themselves, oblivious to facts, sexist, a —we all have colleagues like that.  Plus he talks trash about others, and I think many professors would love to be able to do so but do it in obtuse ways.

Like @AcademicsSay once said, “If you can’t say anything nice, say it in the form of a question.”

Honestly, I’m surprised anyone noticed. I love Twitter and have found it to be an important research and networking tool, but I had no idea people would find this funny. Let’s not over-intellectualize it. One could read it as social commentary, and maybe it can be used that way, but I think it’s really just a  way to blow off election 2016 fear/steam.

I don’t follow Trump on Twitter, but like all others I can’t stop watching him and facepalming at the things he says. I didn’t recreate any behaviors. The tweets are directly lifted from his feed. I only change a few words to make them about science and education. In fact, some, like his climate change tweets, are verbatim.

The fact that it was such a seamless transition from Benghazi and birth certificates to statistics and climate change is what makes the parody so easy, but also scary.

Does @ScientistTrump point out any real-life conflicts within the scientific community?

He’s got clear positions on these conflicts—for instance, he’s promoting paywalled journals, proprietary software, isolation instead of international collaboration, ignoring the humanities, and hiring part-time faculty. In other words, he’s a great opportunity to call attention to the things like open access, open-source software, and the unjust reliance on itinerant faculty that many of us in the academic community think are really important but ignored issues.