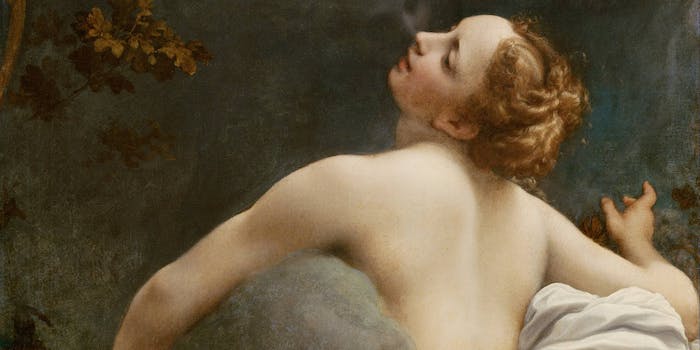 Back in the early 1600s, Galileo and another less-known astronomer, Simon Marius, noted the largest four of Jupiter’s 67 moons. They were named after four of the mythological god Jupiter’s many paramours.

If you’re not up on your Greco-Roman mythology, Jupiter didn’t exactly bed these lovers before he married his wife, Juno.

Fast-forward to 2011, and NASA was launching their space probe Juno, to go take some sweet pics of Jupiter. Then, just yesterday, NASA received word from the probe that it was successfully orbiting Jupiter. So, as some redditors pointed out, you could say that Juno has come to check on her canoodling husband.

Engine burn complete and orbit obtained. I’m ready to unlock all your secrets, #Jupiter. Deal with it.

But in the same r/space thread, another redditor noted that the story gets better: Jupiter knew Juno was onto his cheating. So he attempted to conceal his affairs by covering himself in a cloud. Juno wasn’t fooled. When she saw a cloud getting all up on Io’s business (as depicted in the Correggio painting above), she blew the cloud away to reveal Jupiter’s infidelity.

This capability of peering past Jupiter’s obfuscating clouds is the true origin of the space probe’s name, according to a 2011 press release from NASA, though they worded it a bit more delicately:

Juno’s name comes from Greek and Roman mythology. The god Jupiter drew a veil of clouds around himself to hide his mischief, and his wife, the goddess Juno, was able to peer through the clouds and reveal Jupiter’s true nature.

We hope Jupiter’s true planetary nature is as fascinating as the mythological god’s constant infidelities were to ancient civilization.