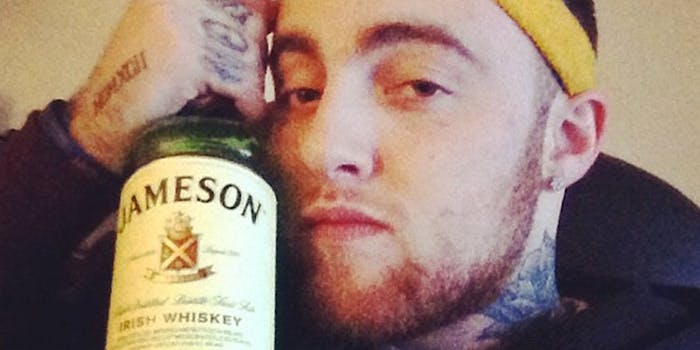 Starved for attention, Donald Trump slithered back into our consciousness by threatening to sue Mac Miller for, apparently, naming a song after him.

Starved for attention, Donald Trump slithered back into our consciousness by threatening to sue rapper Mac Miller for … something.

On Thursday, Trump sent a series of tweets toward the up-and-coming Pittsburgh musician for supposedly unlawfully using his name as the title for his 2011 breakout hit. “Little @MacMiller, you illegally used my name for your song ‘Donald Trump’ which now has over 75 million hits,” he moaned.

Trump might be annoyed that Miller’s song racked up millions of views on YouTube—and earned gold status—without the mogul seeing a dime, since he is obviously struggling for cash. Notably, a lyric in the song includes “we’re going to take over the world while the haters get mad.”

Trump continued: “I’m now going to teach you a big boy lesson about lawsuits and finance. You ungrateful dog!”—unclear if he was actually filing a lawsuit. A similar case was threatened when Walgreens cashier/actress Lindsay Lohan sued rapper Pitbull for using her name in a song. His defense argued that using her name was protected under the First Amendment.

Continuing his rampage, Trump called Miller “ungrateful” and planting a vulgar image in our minds that the rapper was “kissing my ass.” Trump ended his verbal assault, musing “Little @MacMiller—I have more hair than you do and there’s a slight age difference.”

Trump, who congratulated Miller shortly after the song hit 20 million views, caught wind of Miller’s recent comments to Complex. Miller said he wasn’t a fan of Trump’s political aspirations and called him a “dick” and a “douchebag” for his incessant tweets about the song.

So far, Miller hasn’t responded on Twitter. He’s currently enjoying the slopes in Austria, which sounds a lot nicer than waging a Twitter war with a petty billionaire.