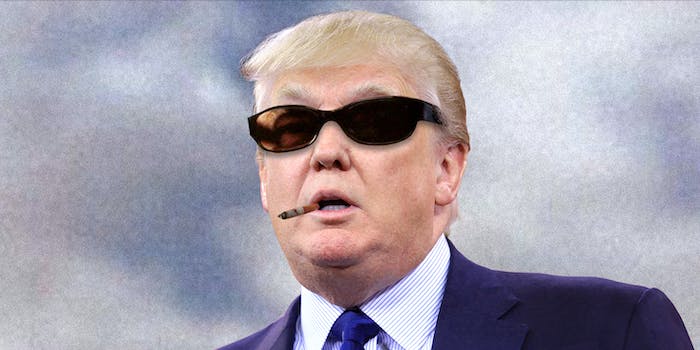 Does Donald Trump steal all of his tweets from this weird Twitter user?

You’d be hard-pressed to find a more universally revered Twitter figure than @dril. For a medium that so readily engenders hate, just about every person adores the weird Twitter user and his fabricated persona that’s the perfect mixture of musculature, bravado, and emasculation.

You’d also be very hard-pressed to find a more universally despised person on Twitter than our current president. His off-the-cuff remarks often enrage the internet, bringing about scorn and vitriol.

That’s weird because the two—one loved, one hated—are pretty much the same person on the social platform. I first noticed the similarities when Donald Trump tweeted “see you in court,” after his travel ban was struck down, a nonsensical threat because he had just lost in court.

The completely sincere sense of umbrage—even after knowing you’ve been thoroughly and properly defeated—reminded me of one of @dril’s most popular tweets ever.

In fact, every time Trump invokes the judiciary, he uses a tone that is distinctly @dril.

judges are bullshit, your honor

Call it Dril’s Law. For every single thing Donald Trump has tweeted, Dril did it earlier and better.

They’ve had similar issues with women and strike a similar tone on the subject.

im the good man whorespects his followers, i respect the artistriy of tweeting and i respect my girl followers also. nuff said dip shit

I have tremendous respect for women and the many roles they serve that are vital to the fabric of our society and our economy.

As you may have guessed, their thoughts on our last president, Barack Obama, are downright identical.

I don't hate Obama at all, I just think he is an absolutely terrible president, maybe the worst in our history!

The Foundation For The Restoration Of American Honor Has Given President Barack Hussein Obama A Hitler Rating Of 34. This Is The Worst One.

Neither of them think Obama was born in the United States, that’s for sure.

And they both want the United States to build better nukes, a position @dril took long ago.

@USArmy you should invent a gun that sjhoots nuclear bullets

The Ebola crisis really showed just how identical their tweets are.

The Ebola doctor who just flew to N.Y. from West Africa and went on the subway, bowling and dining is a very SELFISH man-should have known!

is it true that the ebola man works at a @cocacola plant. it would be fucked up if he touched the cans and shit,

And both of them believe in the power of the internet.

How do you fight millions of dollars of fraudulent commercials pushing for crooked politicians? I will be using Facebook & Twitter. Watch!

why won't anyone fight me on this site. i want to slam one of you smug motherfuckers to hell, with the good words that i type and post here.

Hell, @dril was claiming “this negative story about me is fake” way before our current commander-in-chief.

Can't believe these totally phoney stories, 100% made up by women (many already proven false) and pushed big time by press, have impact!

But really, it’s everything. Look at all these tweets. Once you see it, you can’t stop seeing it.

another day volunteering at the betsy ross museum. everyone keeps asking me if they can fuck the flag. buddy, they wont even let me fuck it

Explain to @brithume and @megynkelly, who know nothing, that I will beat Hillary and win states (and dem-indie votes) that no other R can!

BEGRUDGINGLY EXPLAINING THE JERKOFF MANIFESTO TO ANOTHER CONCERNED MEDIA OUTLET

What my father really gave me is a good (great) brain, motivation and the benefit of his experience-unlike the haters and losers (lazy!).

basically,actual doctors have told me my brain is Perfect. ANYWAY, HGeres nine paragraphs I wrote on why leaving tips at restaurants is bad

It really works for everything.

I dictate my tweets to my executive assistant and she posts them. "Time is money"—The Art of the Deal.

fuck "jokes". everything i tweet is real. raw insight without the horse shit. no, i will NOT follow trolls. twitter dot com. i live for this

For all of my many Jewish friends, Happy Passover.

Dril’s real identity has never been made public. What if Donald Trump is @dril? Would it be any stranger than Donald Trump being president of the United States?